WASHINGTON (CNN) -- The head of a shipping company recently victimized by pirates off the Somali coast told lawmakers Tuesday that U.S. cargo crews should be allowed to arm themselves in response to the rising hijacking threat. 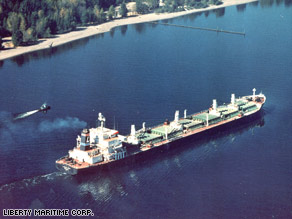 In April, pirates attacked The Liberty Sun, a U.S.-flagged cargo ship, but were unable to board.

Philip Shapiro, head of Liberty Maritime Corp., told a U.S. Senate Commerce subcommittee that the owners of U.S.-flagged "have done all they can within the law to protect our crews."

Unfortunately, he said, U.S. vessels are still largely at the mercy of pirates in shipping lanes around the heavily trafficked Gulf of Aden.

"In light of the recent threats to U.S. merchant mariners, we respectfully request that Congress consider clearing the obstacles that currently block ship owners from arming our vessels," Shapiro said.

Pirates unsuccessfully attempted to board the Liberty Sun, a cargo vessel owned by Shapiro's company, near the Somali coast on April 14. The ship was on a humanitarian relief mission at the time, carrying 47,000 tons of food to Mombassa, Kenya.

Pirate leaders later said the attempted hijacking was carried out as revenge after the U.S. Navy killed three pirates involved in a failed attack on the cargo ship Maersk Alabama. The slain pirates were holding Capt. Richard Phillips, who was in charge of the Alabama when it was boarded April 8.

"We've heard some suggestions that U.S.-flagged ship owners have not done enough to protect their vessels," Shapiro said. "That view ... is flat wrong. Our company adopted every measure recommended by the international maritime organizations and required by the Coast Guard's approved security plan for making the vessel a difficult piracy target -- and more."

Shapiro said that U.S. crews have a right to self-defense under U.S. laws dating back to 1819, but "recently enacted State Department arms export regulations effectively prohibit the arming of vessels."

He also said that ship owners are at risk of "being second-guessed in U.S. and foreign courts for self-defensive measures that were common in 1819."

Shapiro urged congressional leaders to help "bring U.S. law up to date and give us the legal framework we need to be able to protect ourselves."

Until then, he said, U.S. naval escorts or government security teams will be required for U.S. vessels on high-risk transits.

Shapiro was joined at the committee hearing by Phillips, who said the most desirable response would be the establishment of U.S. military escorts as well as military detachments.

Phillips repeated an assertion he made before a separate Senate committee last week that arming vessels' crews could provide an effective deterrent -- but only under certain limited circumstances.

"Unless the root causes of piracy are addressed [on land], piracy will continue to expand and evolve into an even greater threat for American and foreign seamen," Phillips said.

A Transportation Department official testifying at the hearing noted that the ships most vulnerable to attack are those built low to the water with insufficient top speeds.

Ships need to be able to accelerate to "a high rate of speed [for] aggressive maneuvering" and should have high walls that are tough for pirates to scale, said Undersecretary of Transportation Roy Kienitz.

He recommended that ship owners mandate a range of "best practices," including having fire hoses to spray water over the side of a ship and extra manning for watches during dawn and dusk, when attacks are tougher to detect.

Shapiro said that the crew of the Liberty Sun was able to fend off the pirate attack in part by rigging fire hoses to cover the stern of the vessel and "create a virtual flood wall of water coming off the ship."

Sen. Frank Lautenberg, D-New Jersey, applauded the efforts of the crews on both the Alabama and the Liberty Sun.

"These bandits have to be stopped," he said at the opening of the hearing.

"Violence and lawlessness will not be tolerated whether on land, in the sky or at sea. We have a duty to protect the ships that proudly fly America's flag."

All About Pirates • Maersk Alabama • Somalia