CIA says Pelosi knew about waterboarding; she says no

WASHINGTON (CNN) -- House Speaker Nancy Pelosi is disputing a CIA account sent to Congress that raises questions about her insistence she was never told explicitly that waterboarding had been used on terrorist suspects. 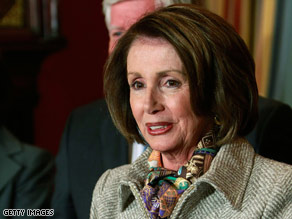 Pelosi told reporters last month that she was told about the legal justification for the interrogation techniques.

The CIA-prepared memo, provided to CNN by Republican sources, lists 40 briefings for members of Congress from September 2002 to March 2009. The first briefing on the list -- on September 4, 2002 -- was for then-House Intelligence Committee Chairman Porter Goss and Pelosi, then the ranking Democrat on the committee.

The subject of the briefing is listed as EITs, or enhanced interrogation techniques, "including use of EITs on Abu Zubaydah, background on authorities, and a description of the particular EITs that had been employed."

CIA Director Leon Panetta, in cover letters sent with the memo to the House and Senate Intelligence committees, says the information "is drawn from the past files of the CIA and represents MFR [memorandum for the record] completed at the time and notes that summarized the best recollections of those individuals. In the end, you and the committee will have to determine what actually happened."

Last month, Pelosi told reporters that she was told about the legal justification for the interrogation techniques, including waterboarding, but was never told the controversial technique had been used on any detainees.

"We were not -- I repeat -- were not told that waterboarding or any of these other enhanced interrogation methods were used."

In a statement issued Friday, Pelosi said: "Of the 40 CIA briefings to Congress reported recently in the press, I was only briefed once, on September 4, 2002, as I have previously stated.

"I had no further briefings on the techniques.

"My understanding of the briefing I received is consistent with the description that CIA General Counsel Scott Muller provided to Congresswoman Jane Harman in a letter dated February 28, 2003, which states:

" 'As we informed both you and the leadership of the Intelligence Committees last September, a number of executive branch lawyers including lawyers from the Department of Justice participated in the determination that, in the appropriate circumstances, the use of these techniques is fully consistent with U.S. law.'

"As reported in the press, a cover letter from CIA Director Panetta accompanying the briefings memo released this week concedes that the descriptions provided by the CIA may not be accurate."

However, a CIA spokesman said, "Great care was taken with the list not to go beyond what the records themselves say."

A recently declassified Justice Department memo from 2005 said, "The CIA used the waterboard 'at least 83 times during August 2002' in the interrogation of Zubaydah." That was before the September Pelosi-Goss briefing.

Whether Pelosi knew that waterboarding had been used or was told only it had been approved for use, she did not raise any objection at the time about the technique.

Harman, D-California, who took over Pelosi's position on the Intelligence Committee, did write a letter in February 2003, shortly after she was briefed, raising objections about the legality of the enhanced interrogation techniques.