Editor's note: Alicia H. Munnell is the Peter F. Drucker professor of management sciences at Boston College and director of the Center for Retirement Research. She was a member of President Clinton's Council of Economic Advisers from 1995 to 1997 and was assistant secretary of the Treasury from 1993 to 1995. 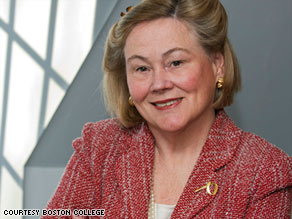 (CNN) -- The nation's financial and economic crisis provided a stress test for the nation's public and private retirement system.

The 2009 Social Security Trustees report released Tuesday provides a basis for assessing how each held up. On the one hand, assets in 401(k) accounts -- which are predominantly in stocks -- have declined in value by about a third, employers are suspending matching contributions, and millions of unemployed workers have seen their retirement savings efforts disrupted.

On the other hand, the Social Security Administration continues to send out monthly checks to 35 million retirees and their spouses, 9 million disabled workers and their families, and 6 million families whose breadwinner has died. In other words, the government system has proved to be much less fragile than the private system of retirement savings.

Social Security did not escape totally unscathed, however. As firms laid off workers, payrolls and payroll tax revenues declined below levels that had been assumed in the previous report. This decline in revenues, together with some changes in assumptions about how long people will live, has accelerated the date when the trust fund is projected to be exhausted and has increased the deficit the system faces over the next 75 years.

The Social Security Trustees now predict that trust fund assets will be exhausted in 2037, four years sooner than the estimate in last year's report. Assuming no new legislation, what happens in 2037?

This date is often described as the point at which Social Security is "bankrupt," leaving the impression that there is no money at all. But payroll tax revenues continue rolling in, and Social Security still has enough revenue to pay roughly three-quarters of promised benefits.

The financial crisis has simply accelerated the date at which this event occurs. Looking at the silver lining, the acceleration may convince policymakers that action needs to be taken sooner rather than later to eliminate the financing gap.

And how much action is required? The Social Security Trustees report the deficit over the next 75 years as a percent of payrolls. That deficit also increased as a result of the financial crisis, but remained in the familiar territory where it has been for the last 15 years.

Over the next 75 years, the Social Security Trustees project a program shortfall equal to 2 percent of covered earnings. That is, if the payroll tax rate were raised immediately by roughly 2 percentage points -- 1 percentage point each for the employee and the employer -- the government would be able to pay the current package of benefits for everyone who reaches retirement age at least through 2083.

A lasting fix for Social Security would require additional changes, as an aging population continues to present financial challenges beyond the 75-year horizon. Solutions that focus just on the next 75 years typically involve the build up of trust fund assets in the near term and the sale of those assets to pay benefits in the out years.

Since the trust funds have no further bonds to sell in the 76th year, the program is suddenly short of money. So, realistically, eliminating the 75-year shortfall should probably be viewed as the first step towards long-run solvency.

The bottom line, however, is that the 2009 Trustees Report did not reveal any important new information about the finances of the Social Security system. The system has enough money to pay full benefits for decades, although for a few years less than previously reported because of the financial/economic crisis. And the system faces a long run financial shortfall of about 2 percent of taxable payrolls, a figure that is higher than last year's estimate because of the financial/economic crisis but well within the range of deficits estimated over the past 15 years.

The new information that we have about Social Security is how well it has withstood the onslaught of the financial/economic crisis. Social Security checks have gone out on time. Though the amounts are not large, the benefits are increased each year to reflect changes in the cost of living, and they continue for as long as the recipient lives. So, despite the modest amounts, the benefits are extremely valuable and people can count on them regardless of what happens to financial markets or the real economy.

In contrast, the financial crisis has demonstrated the vulnerability of 401(k) plans to economic and financial conditions. 401(k) balances, which are modest at best, declined in value by about one-third. And, as the financial crisis spread to the real economy, employers suspended their matches, and employees without jobs were forced to discontinue contributions. In other words, in the wake of the shift away from traditional defined benefit pension plans, the only real supplement to Social Security for most private sector workers is fragile.

The fragility of the employer-sponsored system, as evidenced by the impact of the financial/economic crisis, makes the basic public pension system all the more important.

So when the time comes to decide between revenue increases and benefit cuts to close Social Security's financial shortfall, policymakers may be surprised to find that Americans might be willing to pay up to maintain current benefit levels. Of course, the amount that they have to pay up will be less the sooner the problem is addressed. So if the 2009 Trustees Report serves as a call to action, then it has played a useful role.

The opinions expressed in this commentary are solely those of Alicia Munnell.