WASHINGTON (CNN) -- Israeli Prime Minister Benjamin Netanyahu met in President Obama what might be a new chapter in the 60-year relationship between Israel and the United States. 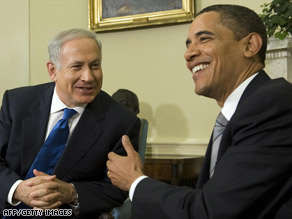 Observers think this administration -- Obama, National Security Adviser Gen. Jim Jones and Middle East envoy George Mitchell in particular -- are predisposed to be tougher on Israel than the Bush administration was. Israelis are concerned the special strategic relationship between the United States and Israel could be in jeopardy.

Because Obama has made clear he thinks a Palestinian state better serves Israel's and the United States' security, there were expectations of a showdown between him and Netanyahu.

Netanyahu came to Washington refusing to commit to a two-state solution and instead talked of a "Palestinian entity" with promises of beefed-up economic development. Arab states and the United States have said that's not a substitute for a true Palestinian state.

Because of the good will and enhanced credibility the election of Obama has brought the United States around the world, he can ask for more, and expect more, on this issue. The United States is working with Jordan's King Abdullah to "sequence" the Arab initiative, a plan proposed by then-Saudi Crown Prince Abdullah in 2003 and endorsed by the Arab League. Under the plan, all Arab states would normalize relations with Israel after it returns former Palestinian, Syrian and Lebanese territories.

The United States wants Israel and the Arab countries to take simultaneous steps toward peace. For instance, if Israel halts settlement activity or removes outposts, the Arabs could take any number of steps, such as opening trade offices in Israel or allowing telecommunications or air travel between Israel and Arab countries.

There is a long list of potential moves and different Arab countries are considering steps from the list. Some are more willing to participate than others. We will probably hear more about this in the coming weeks as Egyptian President Hosni Mubarak and Palestinian Authority President Mahmoud Abbas visit Washington later this month.

Netanyahu has also made clear one of his main priorities is dealing with the threat posed by Iran's nuclear program; he's said that if the United States can't eliminate the threat through talking, Israel will do so militarily. He also has threatened to halt progress on the Palestinian issue until the United States takes meaningful steps to curb Iran. The United States has made clear that such threats are a nonstarter.

Netanyahu's position is to solve Iran first and then Israel can deal with Palestinian peace. The United States wants the Israelis to make peace with the Palestinians and it will deal with Iran at the same time. In fact, Washington believes progress on the Palestinian issue could rally Arab support for dealing with Iran.

Israeli diplomats said Netanyahu is not going to provoke a confrontation with Obama and they expected him to announce some immediate steps to improve the quality of life for Palestinians in the West Bank, including removing illegal settlement outposts. However, Netanyahu made no such announcement during a brief photo opportunity with Obama.

Netanyahu was expected to make a statement supporting the idea of a Palestinian state, but most analysts said he would stop short of a full endorsement. Again, sitting next to Obama, Netanyahu spoke of a scenario in which "Israel and the Palestinians live side by side in dignity, security and in peace," but he didn't mention a Palestinian state.

No breakthroughs were expected. Monday's meeting was largely expected to be a chance for the two sides to discuss their positions rather than iron out differences. Some might see this as Obama being tougher on Israel, but others say it's an evenhandedness that hasn't been seen from recent U.S. administrations.

In short, it seems the Obama administration is going to use more of a tough-love approach to Israel, rather than just automatically siding with it.