WASHINGTON (CNN) -- A Republican congressman Wednesday asked the head of the FBI to investigate allegations that the CIA lied to Congress about the Bush administration's use of "alternative" interrogation techniques on suspected terrorists. 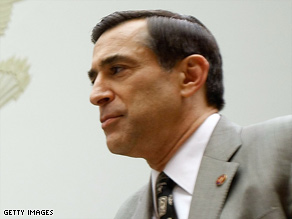 Rep. Darrell Issa, a member of the House Judiciary Committee, asked FBI director Robert Mueller whether the bureau was investigating that allegation and whether he could request a probe as a member of Congress. He said the claim, leveled last week by House Speaker Nancy Pelosi, left him doubting whether "I can believe in the briefings I am receiving" from intelligence agencies.

"If CIA is lying to any of us -- and I have been briefed many times by them on the Intelligence Committee -- it puts me in a position of not being able to do my job properly," said Issa, R-California.

Pelosi made the charge in response to questions about what she was told about the use of the techniques, which critics say amounted to the torture of prisoners in U.S. custody. Her claim provoked a firestorm on Capitol Hill, with Republicans -- who generally defend the techniques -- blasting Pelosi and demanding she back up the allegation.

Mueller said he would check into whether Issa's request would be enough to launch an investigation.

Watch more on the Pelosi-CIA controversy »

Justice Department documents released in April show Bush administration lawyers authorized the use of techniques such as sleep deprivation, slapping, stress positions and waterboarding, which produces the sensation of drowning.

Waterboarding in particular has been considered a form of torture since the Spanish Inquisition, and U.S. authorities prosecuted Japanese officers who used the techniques against American prisoners during World War II.

But Bush administration lawyers argued that the tactics did not violate U.S. laws against torture as long as interrogators had no intent to cause "severe pain." Many Republicans, including former Vice President Dick Cheney, argue the tactics produced useful intelligence that saved American lives.

Pelosi, D-California, has called for an investigation into whether the Bush administration authorized the torture of suspected al Qaeda figures, prompting Republicans to question what she knew about the tactics at the time they were approved.

She told reporters last week that she was briefed by the CIA on such techniques once -- in September 2002, when she was the ranking Democrat on the Republican-led House Intelligence Committee -- and that she was told at the time that techniques such as waterboarding were not being used. She said she learned that waterboarding had been used after other lawmakers were briefed in 2003.

CIA spokesman George Little said last week that the agency's records indicate Pelosi was briefed on the interrogation methods being used. But Little said it was up to lawmakers "to determine whether this information is an accurate summary of what actually happened."

Rep. Pete Hoekstra, the top Republican on the House Intelligence Committee, said Monday that Pelosi may be forced to resign if her claims are proven untrue.

But Rep. Baron Hill, D-Indiana, said Republicans are trying to divert attention from the question of torture by attacking Pelosi.

"I think a lot of people have lost focus on the people who put those torture policies in place in the first place," Hill said. "Nancy didn't do anything wrong, in terms of the legalities, that I'm aware of. I don't know what she was told."