Who is Sonia Sotomayor?

(CNN) -- Judge Sonia Sotomayor knew she wanted to go into law from an early age. 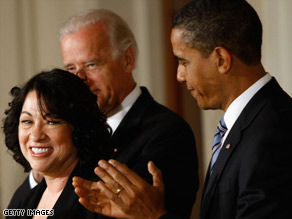 Sonia Sotomayor says the nomination is the "most humbling honor " of her life.

As a child, she aspired to be like Nancy Drew, the detective in the popular children's mystery series. But at the age of 8, she was diagnosed with diabetes and told she would not be able to pursue that line of work.

Sotomayor said it was another fictional character that inspired her next choice.

"I noticed that [defense attorney] Perry Mason was involved in a lot of the same kinds of investigative work that I had been fascinated with reading Nancy Drew, so I decided to become a lawyer," Sotomayor told the American Bar Association publication in 2000. "Once I focused on becoming a lawyer, I never deviated from that goal."

Sotomayor's parents came to New York from Puerto Rico during World War II. Her father worked in a factory and didn't speak English.

She was born in the Bronx and grew up in a public housing project, not too far from the stadium of her favorite team -- the New York Yankees. Her father died when she was 9, leaving her mother to raise her and her younger brother on her own. Related: Sotomayor well known in sports

Her mother, whom Sotomayor describes as her biggest inspiration, worked six days a week to care for her and her younger brother, and instilled in them the value of an education.

In her three-decade career, she has worked at nearly every level of the judicial system, and on Tuesday she became President Obama's pick to replace retiring Justice David Souter on the Supreme Court.

Sotomayor thanked Obama for "the most humbling honor of my life."

"I hope that as the Senate and American people learn more about me, they will see that I am an ordinary person who has been blessed with extraordinary opportunities and experiences. Today is one of those experiences," she said.

The 54-year-old judge, if confirmed, would become the first Hispanic to serve on the high court. She would also be the third female named to the Supreme Court, and the second on the current court.

See who's already on the Supreme Court »

Sotomayor is touted by supporters as a justice with bipartisan favor and historic appeal.

She currently serves as a judge on the 2nd U.S. Circuit Court of Appeals. The liberal-leaning justice was named a district judge by President George H.W. Bush in 1992 and was elevated to her current seat by President Clinton.

Supporters say her appointment history, along with what they describe as her moderate-liberal views, will give her some bipartisan backing in the Senate.

Sotomayor presided over about 450 cases while on the district court. Prior to her judicial appointments, Sotomayor was a partner at a private law firm and spent time as an assistant district attorney prosecuting violent crimes.

Robin Kar, who clerked for Sotomayor from 1998 to 1999, described her as a "warm, extraordinarily kind and caring person."

"She has an amazing story, but she's also just an amazing person," he said, adding that she has a knack for getting to know those around her. "She was the judge who, in the courthouse for example, knew all of the doormen, knew the cafeteria workers, who knew the janitors -- she didn't just know all of the other judges and the politicians. She really went out of her way to get to know everyone and was well loved by everyone."

Conservatives argue Sotomayor has a "hard-left record" and believes that judges should consider experiences of women and minorities in their decision-making. They also described her as a "bully" who "abuses lawyers."

Asked about allegations that she tends to be prickly with her colleagues, Kar said, "I would say no to that. What I would say is that she has a reputation for being prickly on the bench, which is a bit different."

Kar said if attorneys have with a weak argument, "she's very quick ... and intellectually demanding."

"They'll have a hard time if they show up in her court without really doing their homework," he said.

Margarita Rosa, a Princeton classmate of Sotomayor, said she's always known the high court nominee to be "measured and methodical" in her decision-making.

"She really looks at the facts and she is, I think, very evenhanded and fair -- but does bring to the table a very valuable understanding of the challenges and experiences, I think, of average people," she said.

Obama has said he hopes confirmation hearings will be held in July, with the confirmation completed before Congress leaves for the summer.

Sotomayor was confirmed to her current seat by the Senate in 1998, a process that took more than a year. The final vote was 67-29.

Though a majority of Senate Republicans opposed her nomination, she did win several key Republican votes that year, which could prove critical in this year's confirmation fight.

In 1998, the New York judge won the support of 25 Republicans, including eight senators who still serve. If Sotomayor is able to maintain the support of just a few of those GOP senators this year, Senate Republicans would face an almost impossible task in defeating her nomination, even by filibuster, which requires 40 votes. Currently, Republicans hold 39 senate seats.

All 29 votes against her 1998 nomination were from Republicans, 11 of whom still serve.

CNN's Kristi Keck and Robert Yoon contributed to this report.