Prepping Sotomayor for hearings: Get your game face on

WASHINGTON (CNN) -- Turning a federal judge -- even one like Sonia Sotomayor, who has gone through Senate confirmation hearings before -- into a Supreme Court nominee ready for prime time takes a lot of preparation, mock hearings and coaching. 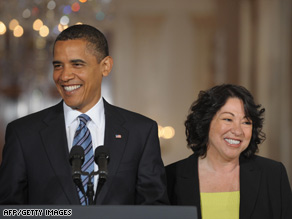 The Bush White House brought in outside advisers to shepherd nominees John Roberts and Samuel Alito through the minefield of the U.S. Senate.

The Obama administration built a team from within to lead the effort to confirm Sotomayor, including a large role for Sen. Charles Schumer, D-New York, a veteran member of the Judiciary Committee and the senior senator from Sotomayor's home state.

The vice president, a veteran of Supreme Court nominations from his time on the Judiciary Committee, is also expected to play a key role, an administration official confirmed to CNN.

Sotomayor has already started reaching out to members of Congress, talking by telephone Wednesday with the Senate majority and minority leaders as well as the two ranking members of the Judiciary Committee, the White House says.

The first key test for her will come in the one-on-one meetings with the senators who sit on that panel, expected to get underway next week.

"It's very important. Senators will form opinions based on the one-on-one meetings, they'll talk to their colleagues about their perceptions that they've taken away from those meetings, and that will start to form perceptions," said Ed Gillespie, who helped guide Roberts and Alito through their confirmations.

It is a delicate dance, as senators can be expected to probe Sotomayor on everything from her judicial beliefs to the impact of outside societal influences on her decision-making.

Read about some of Sotomayor's key rulings »

"I think they're early warning systems, and they give you a sense of what's likely to come up in the hearings and what questions are going to be asked," Gillespie says.

Gillespie's advice to nominees: Don't get distracted by media coverage or interest groups; stay focused on your mission; sway first as many as possible of the 19 senators sitting on the committee during the confirmation hearings, and then the entire Senate when it votes.

"Judges are people too, and they see the ads. They hear from friends. You know they get e-mails saying they heard this awful rumor or this story that's out there. The key is to understand that the only audience that matters is the audience ... on the committee, and 100 on the Senate floor, and to keep the rest of it blocked out, keep the focus on the preparations for the hearings, do well in the one-on-ones, and it's a lifetime appointment. All those rumors and all those ads will fade away and [the justice] will be there forever," Gillespie said.

Nominees undergo strenuous mock sessions preparing them for all types of possible questions.

"The stamina is important, and actually going through -- we did hearings that were based on the same time that the hearings on the Hill would be and anticipation of an eight- to 10-hour day for the nominee, because it's a little bit like preparing for a game -- you have to get your game face on and you have to have that mentality that I'm going to go through this drill and do it in real time," Gillespie recalls from his experience.

Another man who has prepped nominees gave this advice to those following in his footsteps: "Don't be cowed by the brilliance of the nominee; conduct high school government class-style review sessions of the basics. Ask her when she last looked at the Constitution. Better yet ... make her read it again. Ask her to go through the Federalist Papers ... and other pivotal cases that shifted the country's legal course," wrote Tom Korologos in an op-ed this weekend in the Washington Post.

Korologos also had some advice for the hearings: Pause before you answer; senators will think they've asked a tough question. If they do ask a tough question and you need to hit back, lean forward into the microphone as you do it. That makes you look unafraid.

And remember the 80/20 rule -- if senators are talking 80 percent of the time, you're doing great.