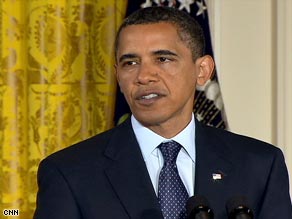 President Obama announces Friday the creation of the post of cyber security coordinator.

The president said he will personally select the person who takes on that post.

"I'll depend on this official in all matters relating to cyber security, and this official will have my full support and regular access to me as we confront these challenges," he said.

The economic crisis cannot be tackled without ensuring the safety of the nation's online activities, Obama said. "America's economic prosperity in the 21st century will depend on cyber security," he said.

"Our technological advantage is a key to America's military dominance," he added. "But our defense and military networks are under constant attack. Al Qaeda and other terrorist groups have spoken of their desire to unleash a cyber attack on our country -- attacks that are harder to detect and harder to defend against."

The country is not adequately prepared, he said, to defend against a possible "weapon of mass disruption."

"From now on ... the networks and computers we depend on every day will be treated as they should be: as a strategic national asset," Obama said. "Protecting this infrastructure will be a national security priority."

Obama vowed that these efforts "will not include monitoring private sector networks or Internet traffic. We will preserve and protect the personal privacy and civil liberties that we cherish as Americans."

"I know how it feels" to have online privacy violated, the president said.

He referred to last year's hacking of computers at his campaign headquarters. The hackers did not access databases containing information about campaign donors, but did gain access to policy position papers and travel plans, Obama said.

CNN reported in November that computers at the headquarters of Obama's rival for the presidency, Sen. John McCain, had been broken into with similar results.

The results of the review are posted at www.whitehouse.gov, along with links to more than 100 documents that helped inform the review.

The military has said it is working to create a Cyber Command. Last month, Defense Secretary Robert Gates said the command would initially be under the U.S. Strategic Command.

The president is expected, within weeks, to sign a classified order officially creating the command, defense officials told CNN.

The Department of Homeland Security reports the number of cyber attacks on government and private networks increased from 4,095 in 2005 to 72,065 in 2008.

This month, a Transportation Department audit -- carried out after hackers got into a support system containing personnel records -- indicated the nation's air-traffic control system could be at risk.