WASHINGTON (CNN) -- When you think of high-risk jobs, you probably do not think of judges. But perhaps you should. 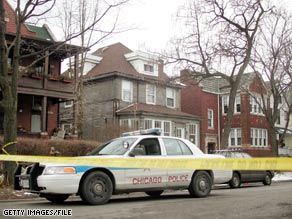 In 2005, a man angry about a Chicago judge's ruling killed the judge's husband and mother, authorities say.

U.S. District Court Judge Reggie Walton has had his share. His decision not to grant bail to Vice President Dick Cheney's former chief of staff, Scooter Libby, triggered several threats, but there have been others.

"I received some threats in a case about a bear hunt that I refused to stop from animal-rights activists. I also received some after I issued a Second Amendment opinion," Walton says.

As a result, the U.S. Marshals Service, which is responsible for the protection of federal judges, installed an elaborate camera surveillance system at Walton's house. He has taken other protective measures himself, which he declines to disclose.

"You can't let it impede on what you do as a judge, but obviously you're concerned about your security and the security of your family, so you do take it seriously."

Watch how threats have increased »

Bobby Fagan, deputy assistant director of the U.S. Marshals Service, also takes it seriously. "Our third branch of government is where the rule of law and our basic freedoms are upheld day in and day out. The civilized world could not function without our judicial branch, and for them to be independent and safe and not intimidated or harmed ... is a sacred responsibility of the Marshals."

The Marshals' Judiciary Security Division has opened a threat management center to collect, analyze and investigate inappropriate communications with judges. Fagan says it is sometimes a challenge to distinguish between a threat and a legitimate expression of opinion.

In borderline cases attorneys are consulted to determine whether a communication crosses the line of protected First Amendment speech.

Fagan says the people sending the threats are "individuals frustrated with the legal system" who "feel that they have not gotten their day in court." Investigation often reveals that they have made previous threats against judges in state and local courts. Fagan says the threats often escalate as a case moves through the legal system. "The federal court is their final forum, the last resort in their minds to get justice."

Judge Laurie White of the Orleans Parish Criminal Court in Louisiana says she has not gotten any threats in her two years sitting on the bench. However, she did get threats when she was a prosecutor and a defense attorney, and she is well aware of the dangers. She feels exposed to possible danger from her doorstep to her courtroom.

"If you're going to get elected and be in the rough and tough world of criminal justice, you can't be shy and you'd better have nerves of steel. And you better have a strong gut. Because it is not easy, it's not an easy spot, and I think you do this job at your own personal risk."

In Louisiana judges are the only ones allowed to carry guns in the courtroom, but White doesn't want to discuss whether she does.

In 2005, authorities say, a man who was distraught about the dismissal of his medical malpractice case murdered the husband and mother of Judge Joan Lefkow in Chicago. That tragic case has led to better reporting of threats against judges, according the the U.S. Marshals.

But Walton has his own theory on why the volume of threats has increased. "I think the unfortunate reality is our society has become so partisan ... that when you have hot-button issues, people take it to the extreme."

He places some of the blame on talk show hosts. "The type of vicious attacks sometimes that you see coming from certain players in the media, I think contributes to the problem."

When asked what can be done about the situation, Walton responds: "It will take societal change, I think," and heaves a deep sigh.

All About U.S. Marshals Service