WASHINGTON (CNN) -- Shortly before President Obama departs for a trip to the Middle East, a new national poll suggests that one in five Americans has a favorable view of Muslim countries. 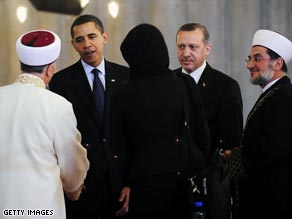 That view compares with 46 percent of the people questioned in a CNN/Opinion Research Corp. survey who say they have an unfavorable opinion of Muslim countries. That's up 5 percentage points from 2002, when 41 percent indicated that they had an unfavorable view.

Meanwhile, three in 10 say they have a neutral opinion of Muslim countries.

But the poll indicates Americans seem to be split on whether such negative opinions by Muslims matter. Fifty-three percent of those questioned say they think Muslim views of the United States matter greatly or moderately, with 47 percent saying that Muslim opinions of the United States don't matter very much or at all.

The poll's release comes hours before the president flies to Saudi Arabia for meetings with King Abdullah. Following the stop in Saudi Arabia, Obama will head to Egypt, where he'll deliver a long-awaited speech Thursday on relations between the United States and the Muslim world.

Watch the challenges Obama faces with the speech »

At a town hall in Turkey earlier this year, the president declared that "the United States is not, and will never be, at war with Islam."

Many Americans seem to agree with the president: Sixty-two percent of those surveyed say they don't think the United States is at war with the Muslim world, with 36 percent indicating that the country is at war with Muslim countries. Those numbers have remained stable since CNN's 2002 poll.

But the poll suggests that six out of 10 think that the Muslim world considers itself at war with the United States.

"The feeling seems to be mutual. We distrust Muslims. They distrust Americans. Views of Americans have not changed very much over the past seven years. There are some indications that Muslims' views of Americans have improved a bit since Barack Obama took office, but they are still not positive," said Bill Schneider, CNN senior political analyst.

The CNN/Opinion Research poll was conducted May 14-17, with 1,010 adult Americans questioned by telephone. The survey's sampling error is plus or minus 3 percentage points.

All About Islam • Barack Obama