JERUSALEM (CNN) -- Israelis and Palestinians had one thing in common Thursday: They hung on every word in President Obama's wide-ranging speech on U.S. and Muslim relations. 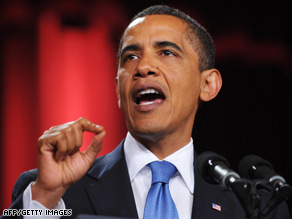 President Obama, speaking in Cairo, Egypt, urges a new chapter in ties between the U.S. and the Muslim world.

The main themes of the address resonated well with Palestinian and Israeli officials, while a Jewish settlers' group -- upset that Obama spoke against settlement activity -- found problems with the speech, and others, like a Hamas official, expressed mixed or negative views.

The government of Israel expressed "hope that this important speech in Cairo will indeed lead to a new period of reconciliation between the Arab and Muslim world and Israel."

"We share President Obama's hope that the American effort heralds the beginning of a new era that will bring about an end to the conflict and lead to Arab recognition of Israel as the homeland of the Jewish people, living in peace and security in the Middle East," it said.

"Israel is committed to peace and will make every effort to expand the circle of peace while protecting its interests, especially its national security."

Watch all of Obama's speech »

Israeli President Shimon Peres welcomed the address, calling Obama's words wise and courageous and saying the president "called for hard work on the part of all the sides involved with the advance of the peace process in the Middle East."

"The concept of peace was born in the Middle East and constitutes the cornerstone of all three monotheistic faiths -- Christian, Jewish and Muslim -- and it is incumbent on the people of Abraham to unite to meet the challenge and together realize the vision of a sustainable peace in the Middle East," he said.

"This was a very important speech, in which President Obama reinforced the message that ending the occupation and establishing a viable and independent Palestinian state was in the mutual interest of Palestinians, Israelis and indeed the entire world. Progress towards peace hinges on both parties implementing their obligations under existing agreements," he said.

He said this means Palestinians must pursue progress "in the areas of governance, security and financial sector reforms" and Israel must adapt "an immediate and comprehensive settlement freeze" and lift restrictions on Palestinian movement.

Erakat also lauded Obama's description of the plight of Palestinians and the "need to address the daily injustices that Palestinians face. This includes the dislocation, dispossession and insecurity that millions of Palestinian refugees face, the intolerable realities of Israel's occupation, especially in Gaza, as well as the importance of Jerusalem to all faiths and peoples, including Palestinians, Christians and Muslims."

Watch Obama call for a two-state solution, end of settlements »

For Nabil Abu Rudeineh, adviser of Palestinian President Mahmoud Abbas, the address was "very encouraging, and this is a new start and different American policy."

"This kind of change is very important for the whole region," he said, making note of Obama's call to stop the Jewish settlement activity.

Rudeineh made reference to Obama's remark that Jerusalem, which Israel has established as its capital, should be "a secure and lasting home" for Christians, Muslims and Jews.

"This is very important . This message should be understood by the Israelis," he said.

Responding to Obama's call for reinvigorating road map diplomacy, he said, "We think that this is the basis for a just and lasting peace in the region. If the Israelis are ready, we are committed to the road map and the Arab peace plan."

Obama lauded Islam's achievements and civilization. Ahmed Yousef, a Hamas official who is an adviser to the Foreign Ministry in Gaza, praised his words on the religion. "But where was the call for Palestinian right of return to lands lost when Israel was created or the continuing blockade on Gaza?" he asked.

In a West Jerusalem cafe, Israelis who watched the speech were heartened by Obama's reference to Holocaust denial as "baseless," "ignorant" and "hateful," saying Obama managed to hit a deep chord in the Jewish experience.

One Israeli, Melvin Lopotor, said the speech was "even-handed, and I think that he addressed the issues that I think are reflected in both people."

"What he said, he has already said before, and people know where he stands, but he kind of summarized it all in a very articulate way," he said.

Obama mentioned that he plans to visit the site of Buchenwald, a Nazi concentration camp, and Lopotor said Obama's understanding of historical anti-Semitic persecution and the Holocaust won points.

"He brought out a very important point that we Jews understand and feel strongly about, but the world -- particularly the Arab countries -- don't necessarily understand," Lopotor said.

Ismail Muhamad, a Palestinian at the cafe, said the speech was balanced, promoting conciliation and a new way forward.

An Israeli, Roland Klein, said it's important to realize that the speech was a speech, and "not any kind of serious action."

"Everyone who heard it has to think about it, and this is important," he said. "But it needs to be said, and said aloud."

At a coffee shop in the West Bank city of Ramallah, a man named Tayeed couldn't accept Obama's interpretation and acceptance of the Jewish narrative of history in the region.

Watch Obama talk about how history shaped the present »

While Obama spoke about the plight of Palestinians at the "crossings and the settlements" in the West Bank, Tayeed said, he did not speak about the residents of Jerusalem.

The city has been annexed by Israel and made into its capital, but Palestinians and the world community do not recognize Jerusalem as Israel's capital and believe at least part of it to be occupied territory.

"The residents of Jerusalem," Tayeed said, "are living in the worst situation."

"In general, he admitted that the Palestinians suffered from the Israeli occupation, focused on the settlements and that he is going to abolish the illegal settlements," he said.

Salem said that while Obama talked about Palestinian rockets hitting sleeping children, a reference to the cross-border attacks from Gaza into Israel, he didn't mention Israeli military incursions into the West Bank and its Gaza offensive.

"He could have just mentioned that 'I sympathize with them,' but ... he did not mention that thing at all," he said.

Abed Alsalam abu Askar said he was pleased that Obama mentioned his support for stopping settlement activity, which Askar said he believes is the main obstacle to peace.

"I know that Mr. Obama talked about the Israeli people suffering -- I do not know why they are suffering. I am very happy that he mentioned the suffering of the Palestinians, also."