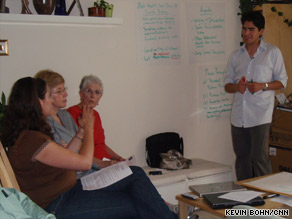 The Democratic National Committee's advocacy arm, Organizing for America, Saturday and through the weekend, sponsored thousands of meetings across the country in which it says tens of thousands of activists gathered -- talking about the problems they encounter and what changes they would like to see and to hear President Obama urge them to get involved and recruit others.

In a taped message played at the meetings, the president says he has already brought together various groups to help propel major reform but implores his supporters to get involved.

"The most powerful way to break through that noise in Washington is for millions of ordinary people to speak up and say you demand health care reform now and to explain why it matters so much in your lives. So right now please add your name if you, too, support the three core principles I've laid out for health care," Obama says, referencing his goals of controlling costs, guaranteeing choice and access to care.

Sixteen people gathered in organizer Sergio Sarmento's apartment in Arlington, Virginia, Saturday afternoon for one of the sessions. Some of the participants urged a national health care system, saying it is the only way to guarantee equal care. Others talked about how powerful the insurance companies are.

"This is the time to change it," Sarmento told the group. "Everyone has a say."

Organizers say this weekend is a kickoff to what they hope will be a summer of lobbying and other action geared toward major changes in the nation's health care system.

In March, the group sponsored a canvassing effort and collected hundreds of thousands of pledges of support for the administration's budget bill. It has also mounted an effort to support the Supreme Court nomination of Sonia Sotomayor.

The health care effort, though, will be the most sustained on a key agenda item for the president.

Activists on all sides are gearing up knowing the next few months will be key to whether major change to the system will be enacted.

Democratic Sen. Edward Kennedy, who is one of the leading advocates for reform, is circulating a proposed bill that includes a government-run insurance option and gives all Americans access to benefits.

Kennedy's committee, Health, Education and Labor, is expected to act within the next few weeks followed by a rapid succession of other action across the Capitol as both the Senate and House are trying to pass landmark health legislation before their August recess.

The White House and Democrats clearly are trying to build momentum that will help overcome the huge obstacles and many interest groups that could derail the major overhaul they are envisioning.

In a conference call last week with volunteers for Organizing For America, the president tried to rally supporters by reiterating the economic costs the administration has emphasized: Americans now spend more on health care than food or housing, health care costs have doubled in the past decade, and fixing it will greatly improve the nation's fiscal situation.

The White House is leaving the drafting of specific bills to Congress, although administration officials are in close contact with members and their aides.

Recognizing that a majority of Americans say they favor major reform and even are in favor of increased government influence to lower costs and increase coverage, Republicans have come up with their own proposals that emphasize choice. They say this weekend's efforts will not help build consensus.

"There is a bipartisan effort that could be made here that could result in broad-based support for real changes in our health care system that the American people want," said Rep. Roy Blunt, R-Missouri, who leads a House GOP task force. "I would like to be part of that. Lots of Republicans would, too, but we can't get through the door to be really part of this discussion.

"Activating the grass-roots effort from the campaign is one way to keep your campaign effort alive. It is not a particularly effective way to create a bipartisan solution to an important problem."

This weekend's effort will not only begin a lobbying campaign. The DNC says it will collect real-life examples of the problems with today's system and will use them to help build public support for change.

As the first legislative action on the issue nears, interest groups involved in all sides are expected to ramp up their efforts.

Conservatives for Patient Rights, which is pushing for less government involvement and is led by former Columbia/HCA executive Rick Scott, just launched a $1.1 million campaign, Health Care for America.

On the other side, a coalition of groups pushing for major reform that includes a government insurance option says it will soon release ads and plans to bring 5,000 people to Washington on June 25 to lobby members of Congress.