Hamas official: After the talk, can Obama walk the walk?

(CNN) -- Most people across Muslim and Arab lands viewed President Obama's speech in Cairo, Egypt, as "excellent," a spokesman for the hard-line Palestinian movement Hamas said. 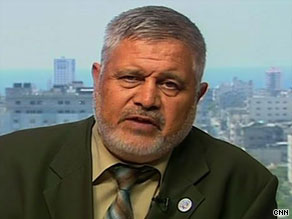 But the official, Ahmed Yousef, interviewed on CNN's "American Morning" from Gaza City, said there's a question on the street: Is the American president "ready to walk the way he talks?"

"This is the question," said Yousef, the senior adviser for former Palestinian Prime Minister Ismail Haniya.

In his address to Muslims, Obama called for bridging gaps between Israelis and Palestinians and urged the establishment of a two-state solution to the conflict. He called for an end to Israeli settlement building, and he called for the Palestinians to end violence against the Jewish state.

And he cast a portrait of a grinding Palestinian existence.

"For more than 60 years, they have endured the pain of dislocation. Many wait in refugee camps in the West Bank, Gaza and neighboring lands for a life of peace and security that they have never been able to lead," Obama said Thursday.

But at the same time, Obama, while acknowledging that Hamas has some support among Palestinians, said the group has to realize that it has "responsibilities."

"To play a role in fulfilling Palestinian aspirations, to unify the Palestinian people, Hamas must put an end to violence, recognize past agreements, recognize Israel's right to exist," Obama said.

The leadership of Hamas, considered by the United States and Israel to be a terrorist organization, won elections in Palestinian territories in 2006, prompting stringent sanctions from the West.

The speech comes months after an eruption of war in Hamas-controlled Gaza, when Israel launched a tough offensive against militants firing rockets at communities in southern Israel before the forging of a cease-fire that Hamas says is violated by Israel.

Though Yousef called Thursday's speech "historical" and cited the president's "wonderful words," he said Obama didn't call for lifting Western sanctions in Gaza and for helping the Palestinians. And, he said, more needs to be done to bridge gaps between the West and the Muslim world.

"They're still ignoring that the Palestinians are suffering from the sanctions, and this has become like a crime against humanity. It's collective punishment endorsed by the people in the West. I hope that we're going to hear something positive and see again action or facts on the ground after this speech," Yousef said.

"President Obama is a professor of international law; he understands that you can't ask the people who are under occupation to recognize their occupier. This is against the international law," he said.

"When we have our own state, a free and independent Palestinian state, then we can talk about this issue of recognition. ... It's too early to talk about recognition while we are suffering for the last 60 years from the occupation."

Hamas says a "concrete path" is required "on the ground."

He now thinks the West needs to prove that it is "really sincere" about Palestinians concern and is "ready to help the Palestinian to have their own independent state."