WASHINGTON (CNN) -- Secretary of State Hillary Clinton said Monday she has ordered a review of security and vetting procedures that let a State Department employee suspected of spying for Cuba slip through the cracks. 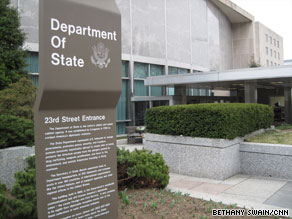 Walter Kendall Myers, a 72-year-old former State Department employee, and his 71-year-old wife, Gwendolyn, were arrested Thursday and charged with illegally aiding the government of Cuba for almost 30 years, the Justice Department said.

The Myerses were charged with conspiracy to act as illegal agents of the Cuban government, providing classified information to that government and wire fraud, according to court documents unsealed in Washington on Friday.

"We are concerned by the announcement of the arrests and the charges against these two individuals, one of whom, as you know, was a former State Department employee, along with his wife," Clinton said.

The couple appeared briefly Friday in Washington before a federal magistrate, who ordered them held without bond pending a detention hearing Wednesday. Judge John Facciolo agreed with prosecutors that the couple might try to flee the country if not held.

"We were confident" at the time of Kendall Myers' retirement, the official said, that he had been passing information to Cuban intelligence. Diplomatic security officials "let it go for a while" to see what information might emerge.

Myers was a senior European analyst in the State Department's Bureau of Intelligence and Research and "had come up in the ranks," the official said.

Court documents said Myers retired from the State Department on October 31, 2007, and had viewed more than 200 classified reports on Cuba in his final months on the job, even though he was, at the time, an analyst working on European issues.

Promising full State Department cooperation with the ongoing investigation and eventual prosecution, Clinton said it was equally important "that we look forward to make sure that we try to prevent something like this from ever happening again."

A law enforcement official told CNN the couple's primary motive was not money. The couple were "true believers" in the Cuban system, the official said.

Although they were paid for "expenses" by the Cuban government, most of their funds, including a $500,000 brokerage account, may be largely from Myers' government salary, the official said.

However, the government intends to move to seize money derived from his employment on the basis the funds were obtained as a fraud, arguing he was really working against the U.S. government.

CNN's Terry Frieden and Jill Dougherty contributed to this report.

All About Hillary Clinton • Cuba • Espionage and Intelligence • U.S. Department of State