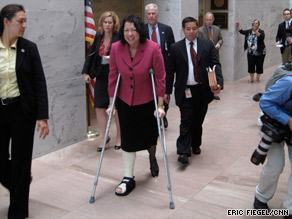 Judge Sonia Sotomayor makes her way around Capitol Hill on Monday on crutches after breaking her ankle.

And a leading Republican, Sen. Mel Martinez of Florida, on Tuesday predicted the Senate will confirm Sotomayor.

Watch more on Sotomayor on a fast track »

Martinez stopped short of endorsing her nomination, saying he wants to wait until after her confirmation hearings are held.

But he had positive things to say about her personal and judicial background and said she would "fit in" well on the Supreme Court.

Martinez, the only Hispanic Republican senator, said he is not concerned about Sotomayor's "wise Latina" comments that sparked controversy because he said there is no evidence that sentiment has influenced her judicial decisions. iReport.com: Is Sotomayor right for the Court?