Is Sarah Palin running for president?

(CNN) -- Has Sarah Palin started running for president? In the last week alone, the Alaska governor appeared at a Republican fundraiser in Washington D.C., attended a baseball game in New York and even led a small-town parade on the U.S. east coast, 5,000 kilometers from her small town on the western side of the continent. 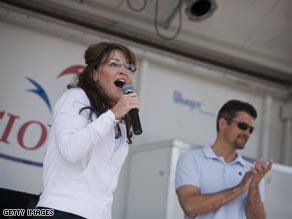 Sarah Palin appears at an autism fundraiser in New York earlier this week.

It looks so much like a campaign for the White House, you could almost forget that Barack Obama has just settled into the presidency and will keep it until the end of 2012 at least.

"I love my time in Alaska," she told Fox News this week." At the same time, though, I crave, if not my voice, but other voices out there, being bold, being strong, letting Americans know that those who are concerned about the growth of government and about national security issues, they're not alone."

Less than a year ago, Palin was unknown to most Americans, leading a sparsely populated state that's physically separated from the rest of the country by a big chunk of Canada in-between.

Then, Republican John McCain chose her as a running mate in his presidential campaign.

McCain lost but in a way, Palin won. She became a household name with a national following. Many Americans fell in love with her image as a working mother with a homespun style and very conservative views.

And since then, the landscape of U.S. politics has changed.

Now, the Democrats have a popular president and an ambitious agenda on economics, diplomacy and defense. The Republicans have no clear leader, no consensus on crucial issues and no plan on how to win back power.

They are losing support in virtually every portion of the population that pollsters can measure, except among frequent church-goers.

CNN's polling suggests the Republicans don't agree on who they want as the voice of their party.

So Palin can't claim to speak for America's Republicans but no one can and given the poor state of the party, it badly need someone to come forward to lead the opposition to Obama.

Palin is coming forward for something.