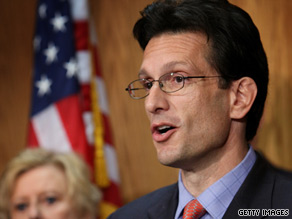 Rep. Eric Cantor says Republicans are drafting a plan to ensure all Americans have access to affordable coverage.

"We do so by making sure we keep down costs and incorporate the ability for folks to pool together to access lower costs, to bring private sector into the game and keep government out," Cantor said.

Neither Democrats nor Republicans have detailed how they would pay for their proposals. Rep. Roy Blunt, R-Missouri, said his party's plan will cost "far less" than that of the Democrats and "provide better results for the American people."

Rep. Dave Camp, R-Michigan, who co-authored the GOP plan, said it's important to make sure the bill is one with a "common-sense approach."

"We are not going to have a bill that is larger than the GDP [gross domestic product] of most countries, which is what we are beginning to see roll out," said Camp, the ranking Republican on the House Ways and Means Committee.

"Clearly, if we move forward and this bill is on the floor, we are going to have to have a bill that is paid for and that's going to depend on what the scores come back."

A score is a preliminary estimate of the cost of proposed legislation. A preliminary review by the Congressional Budget Office of a plan being drawn up in the Senate found it would cost about $1 trillion over 10 years to extend health insurance to 16 million people who otherwise would not be covered, about a third of the roughly 45 million now uninsured.

But Camp and Republicans have not determined key details for their proposal, including the amount of those tax credits or who precisely could be eligible.

This House Republican plan comes a day after fellow Republican Rep. Mark Kirk of Illinois and other moderates in the so-called Tuesday Group released their proposal, which spelled out many of the same ideas as the Camp bill.

Kirk contends his plan is less partisan but said he supports Camp's effort.