Obama to Iran: 'The whole world is watching'

WASHINGTON (CNN) -- President Obama called Saturday for the Iranian government to refrain from violence and injustice against its own citizens. 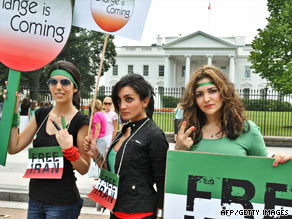 Iranian women demonstrate Saturday in front of the White House, where President Obama issued a statement.

He said the United States stands with all who seek to exercise what he called the universal rights to assembly and free speech.

The statement came as Iranian security forces cracked down Saturday on demonstrators in Tehran in continuing protests against the outcome of Iran's June 12 election.

President Mahmoud Ahmadinejad was declared the overwhelming victor in voting that opposition groups called rigged. No independent monitors were permitted for the election, and protests against the outcome grew in succeeding days.

Thousands of protesters took to the streets Saturday, even though the demonstrations were banned and police confronted them with clubs, tear gas and water cannons. A threatening statement a day earlier by supreme leader Ayatollah Ali Khamenei had raised fears of bloodshed.

Obama received intelligence briefings and discussed the situation with senior advisers throughout the day, an administration official told CNN.

In his statement, Obama repeated a message from his recent speech to the Muslim world in Cairo, Egypt, that "suppressing ideas never succeeds in making them go away."

"The Iranian people will ultimately judge the actions of their own government," Obama said in the statement.

"If the Iranian government seeks the respect of the international community, it must respect the dignity of its own people and govern through consent, not coercion."

Obama quoted slain U.S. civil rights leader Martin Luther King Jr.'s statement that "the arc of the moral universe is long, but it bends toward justice."

"I believe that," Obama's statement said. "The international community believes that. And right now, we are bearing witness to the Iranian people's belief in that truth, and we will continue to bear witness."

The statement was Obama's strongest to date on the Iran situation. He has been criticized by Republicans in Congress for what they called his failure to strongly support the Iranian demonstrators.

Previously, Obama has said he was "deeply troubled" by the violent protests but he has avoided siding with Ahmadinejad's opponents, telling reporters that "it is up to Iranians to make decisions about who Iran's leaders will be."

"It's not productive, given the history of U.S.-Iranian relations, to be seen as meddling, the U.S. president meddling in Iranian elections," Obama said this week.

Diplomats credited Obama with having avoided giving the regime an excuse to blame the turmoil on the Americans.

Several diplomats told CNN that Iran is in "unchartered territory" and said this weekend's events could determine the fate of the regime.

The diplomats said they were watching to see whether Iranian security forces would continue the crackdown. The military has shot people before but never in massive numbers, they said.

All About Iran • Barack Obama • Protests and Demonstrations