(CNN) -- The Nixon Presidential Library released 154 hours of tape recordings and 30,000 pages of documents from the Nixon White House on Tuesday, offering a revealing look at the state of mind of America's 37th president at the start of what would prove to be his disastrous abbreviated second term. 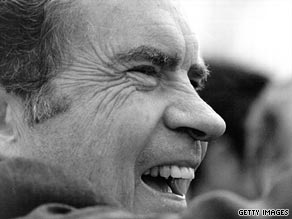 President Richard Nixon smiles and waves to a supporter in Washington in January 1973.

The recordings, encompassing almost 1,000 conversations in January and February of 1973, cover a range of topics, including, among other things, the conclusion of the Vietnam Paris peace talks, the Supreme Court's controversial Roe v. Wade abortion rights ruling, the death of former President Lyndon Johnson, and a rapidly metastasizing Watergate scandal.

They show President Richard Nixon at both his best -- delving into the intricacies of Cold War diplomacy -- and his worst, plotting against his perceived political enemies in the media and elsewhere.

Still basking in the afterglow of a landslide 49-state reelection in 1972, Nixon at one point tells aide Charles Colson that he wants nothing to do with those who would advise reaching out to critics in order to try and unify the country.

"Those people that wanted me to have [an] 'era of good feelings' ... Somebody wrote me a memorandum about that and I told [White House Chief of Staff H.R.] Haldeman if anyone ever showed me that again I'm gonna flush them down the goddamn john," Nixon says.

"You should," Colson replies.

At another point, Nixon tells then-Republican National Committee Chairman George H.W. Bush that the GOP can further boost its electoral fortunes by recruiting "attractive" women to run for office.

Recounting a recent visit to the South Carolina state legislature, Nixon tells Bush that he "noticed a couple of very attractive women, both of them Republicans. ... I want you to be sure to emphasize to our people, God, let's look for some. ... Understand, I don't do it because I'm for women, but I'm doing it because I think maybe a woman might win someplace where a man might not. ... So have you got that in mind?"

Bush replies that he'll "certainly keep it in mind."

"Incidentally, I want it on his private phone too," Nixon tells Colson. "We can get that, can't we?"

Colson then replies that he thinks it can be done.

"Sure, goddamn it. We can get it through the FBI," Nixon replies. "The FBI is to get, to keep the log, on his phone. That's all we want to know, who the hell he calls."

The tapes often show Nixon with a penchant for fixating on even the smallest political disruptions.

On January 20, 1973 -- the day of his second inauguration -- Nixon calls a Secret Service agent to say he "saw the incident where some kid tried to rush the car... I want to be sure they file a charge against him [and don't] just let him go."

The agent assures Nixon that the protester has been put in custody and that a charge has been filed.

The Nixon Presidential Library, in Yorba Linda, California, has been operated by the National Archives since 2007.

CNN's Elaine Quijano and Alan Silverleib contributed to this report