(CNN) -- South Carolina Gov. Mark Sanford, just back from a secret trip to Argentina unknown to his staff or his wife, admitted Wednesday he has carried on an extramarital affair with a woman in Buenos Aires, Argentina. 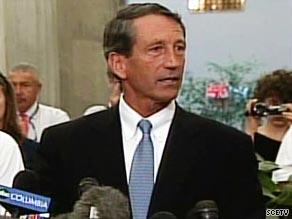 "I've been unfaithful to my wife," Sanford told a news conference in Columbia, South Carolina. "I developed a relationship with what started as a dear, dear friend from Argentina."

His voice choking at times, Sanford apologized to his wife and four sons, his staff and supporters, and said he would resign immediately as head of the Republican Governors Association.

The affair began in the last year and was discovered five months ago, Sanford said without elaborating. He added that he and his wife were trying to work through it.

Watch Sanford admit to the affair »

In a statement issued later Wednesday, Sanford's wife, Jenny, said she asked him to move out two weeks earlier but was still open to a reconciliation for the benefit of their children.

"I remain willing to forgive Mark completely for his indiscretions and to welcome him back, in time, if he continues to work toward reconciliation with a true spirit of humility and repentance," Jenny Sanford said.

The South Carolina governor had not been seen in public since June 18. When questioned, Sanford's staff told media outlets Sanford was hiking on the Appalachian Trail. But Sanford was spotted Wednesday in Atlanta, Georgia's Hartsfield-Jackson International Airport.

Sanford said he had been in Buenos Aires. He said it was his fault for "shrouding this larger trip."

"I'm a bottom-line kind of guy. I'll lay it out, it's going to hurt, and we'll let the chips fall as they may," Sanford told reporters.

View a timeline of the events »

The affair began as a friendship eight years ago, but "over this last year, it developed into something much more than that," Sanford said.

"All I can say is that I apologize," he said, adding that he would appreciate a "zone of privacy" for the sake of his family.

Sanford also traveled to Argentina a year ago as part of a South Carolina Commerce Department-funded trip to South America, according to an itinerary of the trip obtained by CNN. It was unclear if he met with the woman on that trip.

On Wednesday, Sanford said he footed the bill for his most recent trip to Buenos Aires. The governor said earlier in the day he had traveled to Argentina twice before.

When asked if he is trying to reconcile with his wife, Sanford nodded, "I am, yeah." Asked if he and his wife are separated, he said, "I don't know how you want to define that. I mean, I'm here and she's there. I guess in a formal sense we're not, but what we're trying to do is work through something that we've been working through for a number of months now."

However, the statement by Jenny Sanford said the couple was in a "trial separation" after trying to work through the problem in recent months.

"We reached a point where I felt it was important to look my sons in the eye and maintain my dignity, self-respect, and my basic sense of right and wrong," she said in the statement. "I therefore asked my husband to leave two weeks ago. This trial separation was agreed to with the goal of ultimately strengthening our marriage."

Jenny Sanford said there was no contact with her husband during the separation, and she did not know he was in Argentina in recent days.

Also Wednesday, The State newspaper of Columbia published e-mails between Sanford and a Buenos Aires resident named "Maria" from July 2008.

The e-mail continues, "While all the things above are all too true -- at the same time we are in a ... hopelessly impossible situation of love. ... How in the world this lightening strike snuck up on us I am still not quite sure. As I have said to you before I certainly had a special feeling about you from the first time we met, but these feelings were contained and I genuinely enjoyed our special friendship and the comparing of all too many personal notes."

The long-term political fallout for Sanford, 49, is unclear. He has been mentioned as a potential Republican presidential candidate in 2012, after his current second consecutive term as governor ends. South Carolina's constitution forbids a third straight term.

Shortly after Sanford's announcement, Nathan Daschle, executive director of the Democratic Governors Association, issued a statement saying, "Our thoughts and prayers are with Gov. Sanford and his family, and I wish them the best as they try to heal this wound."

However, the Republican leader in the South Carolina Senate questioned Sanford's abdication of responsibility for leaving without notice last week.

"I'm deeply disturbed that no one knew where Gov. Sanford was over the last five days," state Sen. Harvey Peeler said in a statement, adding: "We cannot let the governor's personal life overshadow his public responsibility, or in this case, his negligence of gubernatorial authority."

"In the hours and days ahead, I will reach out to and work with Republican office-holders, candidates, and activists to regain public confidence and win the next round of elections," Floyd pledged.

Sanford has had a bruising year, losing his fight to turn down $700 million in federal stimulus money. Sanford initially tried to require that any stimulus money pay down the state debt, a stance rejected by the Obama administration.

The South Carolina's Supreme Court ruled earlier this month that Sanford had to accept the stimulus funds.

CNN's Peter Hamby and Kristi Keck contributed to this story.