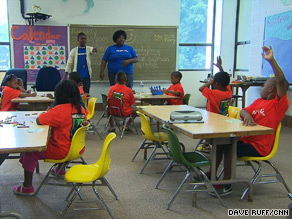 WASHINGTON (CNN) -- Tora Burns leads her classroom with an infectious smile, patiently teaching her young pupils about the benefits of recycling -- and then a catchy little tune to try out at home with their siblings and parents.

"What I want you guys to know is that we can all make a difference," the 19-year-old tells the children as they prepare a coloring lesson that also reminds them of the household materials that belong in the recycling bin -- not the trash can.

The Howard University student wants to be a teacher, and she views this summer classroom experience as a step toward her dream. And the latest evolution in a young lifetime often focused on community service.

Her urge to make inner-city communities better and safer was reinforced, she said, by a jarring memory from her high school days in Detroit, Michigan.

During her sophomore year at Howard, Burns saw a fund-raising table on campus and walked over to donate a few dollars. But the literature caught her eye, and soon she was a mentor in a program run by America's Promise, the community service organization founded by former Secretary of State Colin Powell.

This summer, she also is working with Heads Up, a teaching and mentoring program in Washington that is affiliated with the AmeriCorps national service program.

During the session on recycling, when Burns asked why being environmentally conscious was so important, one young student suggested the sun would go black if people didn't recycle more.

"They say the craziest things," Burns said. "But every now and then you have that 'aha' moment. And I feel you learn a lot more from the students than they learn from you. ... When you see -- it is like a sparkle in their eye, and they are happy when they are learning. I think that is where you see the change."

There are 75,000 AmeriCorps participants nationwide, 1,500 of them in Washington. And 6,000 more slots will be filled come September because of additional funding in the recently passed stimulus legislation.

The need in Washington's inner-city neighborhoods is obvious.

Nearly 20 percent of the city's residents are below the poverty line, and more than 27 percent of children under 5 live in poverty. And while the national graduation rate is just shy of 70 percent, in the District of Columbia it is 48.8 percent.

D.C. Public Schools Chancellor Michelle Rhee has been in her job two years and generating more than her share of controversy by closing underperforming schools and replacing many of the system's principals.

"We've done more in two years than humanly possible," she said in an interview at her office. "But it is still astonishing to me to come into work every day and sit in meetings and hear about the challenges that we're still having and to think -- we're pretty much at ground zero."

To Rhee, "one of the most precious resources at your disposal is time," and while many school systems nationwide are being forced to cut back on summer programs because of the recession, the District of Columbia is expanding its offerings, in part because of projects run by Heads Up, AmeriCorps and other service organizations.

Leaning over one young man in her classroom, Burns offered her advice, and this message: "We are here to teach so that by the time you are out of here, you will be able to count better than anyone your age."

She said she was pushed by her parents to succeed, and nudged back on track by a few key teachers whenever she began to lose her way at school. Now, she pushes herself through 10- and 12-hour days in the summer weeks when her family and many friends are off on nice vacations.