Palin stepping down this month

WASHINGTON (CNN) -- Gov. Sarah Palin announced Friday that she will step down as Alaska's chief executive by the end of the month. She will not seek election to a second gubernatorial term in 2010. 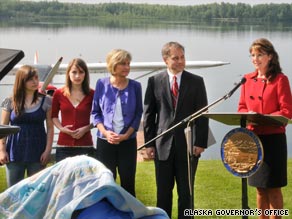 As the 2008 Republican vice presidential nominee, Palin had been considered one of the front-runners for the GOP nomination in 2012.

"People who know me know that besides faith and family, nothing's more important to me than our beloved Alaska," Palin said in an announcement from her home in Wasilla. "Serving her people is the greatest honor I could imagine."

Palin said she was transferring authority to Lt. Gov. Sean Parnell, who will be sworn in at the Governor's Picnic on July 26.

Palin added in a statement that she was "determined to take the right path for Alaska even though it is not the easiest path. ... Once I decided not to run for re-election, I also felt that to embrace the conventional lame duck status in this particular climate would just be another dose of politics as usual, something I campaigned against and will always oppose."

Palin used a sports analogy to explain her decision: "I know when to pass the ball."

A Republican source close to her political team told CNN's John King that it was a "calculation" she made that "it was time to move on." The governor's "book deal and other issues" were "causing a lot of friction" in her home state, the source said, adding that he believes that she is "mapping out a path to 2012."

Another source, speaking on the condition of anonymity, said Palin "thinks she has accomplished goals she has set forward. ... She sees what a positive influence she has had on people's lives from traveling the country in the last year."

Randy Ruedrich, chairman of Alaska's Republican Party, said he "was not even contemplating her stepping down."

Ruedrich said he recently met with members of Palin's staff to discuss her re-election plans.

He said he told them that it would be good if she made her decision by October for fund-raising purposes, rather than wait until June 2010, the legal deadline to commit to an election run. He said he anticipated that she would run for the seat again and was surprised today to learn otherwise.

Ruedrich, who had a rocky relationship with Palin that often played out in the local media during her tenure in Alaska politics, said he last spoke with the governor about a month ago. The discussion was solely on how to help raise funds for the election of Anchorage, Alaska, Mayor Dan Sullivan, he said.

"Either Sarah Palin is leaving the people of Alaska high and dry to pursue her long-shot national political ambitions, or she simply can't handle the job now that her popularity has dimmed and oil revenues are down," DNC spokesman Brad Woodhouse said.

"Either way, her decision to abandon her post and the people of Alaska who elected her continues a pattern of bizarre behavior that more than anything else may explain the decision she made today."

"I am deeply disappointed that the governor has decided to abandon the state and her constituents before her term has concluded," the Republican said via satellite phone from interior Alaska, her office said.

Murkowski is the daughter of former Gov. Frank Murkowski, whom Palin defeated in the 2006 gubernatorial primary.

"I think everyone is shocked by this, and I think to a certain extent everyone is going to assume there's another story. You don't just quit with a year and a half to go. You certainly don't do this as a stepping stone to run for president. You finish the job that you're in, and obviously she's not doing that," he said.

"I think people are going to be very suspicious because of the timing. You don't quit on the Friday of a three-day holiday. If you are going to do this, you think it through; you give a good speech," Rollins said.

However, CNN Republican strategist Mary Matalin said she thought the move was "really brilliant" on Palin's part, though she admitted she was surprised when she heard the news.

"Her delivery was incredible. If you're a less charismatic person, you probably couldn't pull it off," Matalin said. "[Now] she will be freed up and liberated the way Mitt Romney is to raise money and get political chips by spending it and getting political capital. And she is still raising the kinds of crowds and money she always did."

Now, Matalin says, Palin must focus on "putting up with the conventional wisdom" that this was a bad move and travel the country to drum up support for a presidential run.

"She takes that target off her back with a good record to launch from," Matalin said.

When asked whether it's possible Palin stepped down because of negative news that has not emerged, Matalin referenced Palin's own words that investigators have dug through research in the ethics investigation.

"We presume if there was anything else, we would know it by now," Matalin said.

In an interview last month with CNN's Wolf Blitzer, Palin said she was unsure about her re-election bid because she needed to focus on her state and her family.

"No decision that I'd want to announce today," Palin responded.

Palin catapulted on the national stage in August when McCain, the Republican presidential nominee, chose her as his running mate.