Analysis: Who's in charge as Obama visits Russia?

MOSCOW, Russia -- President Obama arrived in Moscow on Monday for a summit with Russian President Dmitry Medvedev aimed at trying to "reset" the U.S.-Russian relationship. But he also may have a less publicized goal: figuring out who's really in charge here. 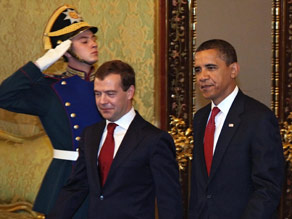 When Obama's predecessor, George W. Bush, engaged in his first summit with his Russian counterpart, things took an odd turn. Bush said -- now infamously -- that he looked into then-President Vladimir Putin's eyes and saw into his soul, and basically found he was a good guy that Americans could do business with. Oops. The Bush-Putin relationship ended up getting pretty chilly, which is why the new U.S. president is now trying to warm things up.

Obama gets his first shot at literally looking into Putin's eyes Tuesday, when he has a sitdown with the man who is now prime minister of Russia, a post that many international analysts believe allows Putin to continue to pull the strings behind the scenes.

Obama's outreach to Medvedev started sooner, their first meeting coming back in April at the G-20 summit in London, and it's been bearing some fruit for Obama. Russia recently signed on to sanctions against North Korea, and this week both sides will officially announce that Russia has agreed to let U.S. military equipment headed for Afghanistan fly over Russian territory.

Both sides are also hoping to announce significant cuts in nuclear arms, though there are still major hurdles to clear, such as Russian suspicions about U.S. plans for a missile defense shield in Eastern Europe. In an interview with The Associated Press late last week, Obama seemed to be trying to work through the sticking points by driving a bit of a wedge between Medvedev and Putin.

"The old Cold War approaches to U.S.-Russia relations is outdated and that it's time to move forward in a different direction," said Obama. "I think Medvedev understands that. I think Putin has one foot in the old ways of doing business and one foot in the new."

Ouch. If he wants to accomplish some key goals in Moscow, such as winning Russian cooperation in dealing with Iran's nuclear program, why would Obama fire a rhetorical shot like that at Putin -- if, in fact, he's really in charge here?

It could be that Obama is trying to flex his muscles a bit for American domestic political consumption to show he's not rolling over to Russia, amid Republican charges that he's soft on foreign policy. It's a move Putin knows well, having perfected the art of flexing his muscles at then-President Bush as a way of asserting Russian nationalism in recent years.

Whatever the intention of Obama's words, the back and forth with Putin is a reminder of the high stakes here. Of course, the president's second stop in Italy for the G-8 summit will be important too, with a packed agenda including Iran, the financial crisis, climate change and eradicating world poverty. The first African-American president's third and final stop at the end of the week in Ghana will also get wide international attention.

But it's this first stop where Obama will get a big diplomatic test as he juggles, among many issues, who's really in charge here.