MOSCOW, Russia (CNN) -- U.S. President Obama and Russian President Dmitry Medvedev concluded a series of agreements Monday -- including one on nuclear arms reduction -- as part of a broader effort to strengthen ties between the one-time Cold War rivals. 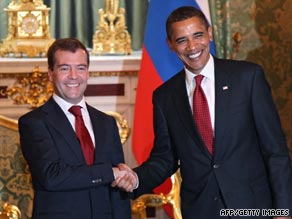 The summit in Moscow was needed to help "reset" a relationship that, according to Obama, "has suffered from a sense of drift" in recent years.

"Too often, the United States and Russia only communicate on a narrow range of issues or let old habits within our bureaucracy stand in the way of our progress," Obama said.

"President Medvedev and I are committed to leaving behind the suspicion and the rivalry of the past, so that we can advance the interests that we hold in common."

Relations between Russia and the United States do not currently "correspond to their potential," Medvedev said, which is problematic given the two countries' "special responsibility for everything that is happening on our planet."

On the most immediate challenge, working out an arms control agreement to replace the START I treaty which expires December 5, the two presidents signed a joint understanding for a follow-on agreement to START that commits both parties to a legally binding treaty that will reduce nuclear weapons.

The joint understanding commits the United States and Russia to reduce their strategic warheads to a range of 1,500 to 1,675, and their strategic delivery vehicles to a range of 500 to 1,100. Under the expiring START and the Moscow treaties the maximum allowable levels of warheads is 2,200 and the maximum allowable level of launch vehicles is 1,600.

Russia has insisted on linking the arms control agreement to the controversial issue of a proposed U.S. missile defense system in Poland and the Czech Republic. The presidents dealt separately with that issue, instructing their experts to work together to carry out a joint threat assessment, analyze ballistic missile threats in the world and prepare appropriate recommendations.

They also announced plans to conduct a joint review on possible cooperation to monitor the development of missile programs around the world. Obama said the two leaders are discussing holding a global nuclear summit next year.

In a joint statement on cooperation in Afghanistan, Russia agreed to allow up to 4,500 flights carrying U.S. military equipment and personnel through Russia for supplying U.S. troops in Afghanistan.

The two leaders also agreed on a work plan for resuming military-to-military cooperation, and agreed on a framework for the U.S.-Russia joint commission on prisoners of war and missing in action.

The United States and Russia also will create a bilateral presidential commission, headed by U.S. Secretary of State Hillary Clinton and Russian Foreign Minister Sergey Lavrov, to provide better structure to the bilateral relationship. It will have a number of working groups on subjects as diverse as nuclear energy, drug trafficking, health and education.

The presidents also agreed to cooperate in the field of public health and medical science.

At their joint news conference, Obama said the two leaders had "frank discussion" on Georgia, with Obama telling the Russian president the territorial integrity of Georgia must be respected.

Obama said he trusts Medvedev to listen, negotiate and follow through on agreements.

Asked by an American correspondent "who is in charge in Russia?" Obama said "his understanding" is that Medvedev is the president and Vladimir Putin is the prime minister.

He said his interest is in dealing with his counterpart, Medvedev, but also to reach out to all parts of Russian society. He said he has a strong impression that Putin and Medvedev and are working closely together.