MOSCOW, Russia (CNN) -- A strong Russia is good for the United States, President Obama said in a speech in Moscow, where he is visiting in an effort to "reset" the countries' relations. 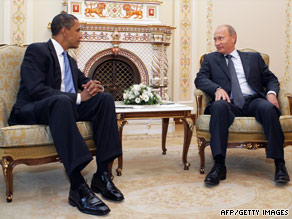 President Obama meets with Prime Minister Vladimir Putin on Tuesday before heading to the G-8 in Italy.

"America wants a strong, peaceful and prosperous Russia," he told a large crowd at the New Economic School. "This belief is rooted in our respect for the Russian people, and a shared history between our nations that goes beyond competition."

He repeated the message in a meeting later with Russian business leaders, but also said Russia has to do more to fight corruption.

"We have to promote transparency, accountability, rule of law on which investments and economic growth depend," he said.

Obama also spoke to civil society leaders, promising the United States will support universal values and human rights such as the rights of people to live as they choose, to have a free press and to speak their minds.

On Monday Obama met with Russian President Dmitry Medvedev and discussed a series of agreements -- including one on nuclear-arms reduction -- as part of an effort to strengthen ties between the one-time Cold War rivals.

The two signed a deal on parameters for negotiations to replace the START agreement, with the goal of reducing nuclear weapons. START expires December 5.

The two-day summit in Moscow was to help refocus a relationship that, according to Obama, "has suffered from a sense of drift" in recent years. The president reiterated that in his speech Tuesday.

"That is why I have called for a 'reset' in relations between the United States and Russia," Obama said.

"This must be more than a fresh start between the Kremlin and the White House, though that is important," he said. "It must be a sustained effort among the American and Russian people to identify mutual interests and to expand dialogue and cooperation that can pave the way to progress."

Obama met with Medvedev again Tuesday and with Prime Minister Vladimir Putin before heading to Italy for the Group of Eight summit. The G-8 agenda is packed with issues, including Iran, the global financial crisis, climate change and eradicating world poverty.

Putin said his meeting with Obama was "very good and substantive."

"We also talked about how we will be improving our relations in the near- and medium-term. It was a very well-intentioned and substantial conversation in many concrete fields. We have many points we agree on," Russia's prime minister said.

After his speech, Obama sat down with Ed Henry, CNN senior White House correspondent, for a brief interview.

The president spoke about a wide range of issues, including how much his daughters were enjoying Moscow, his impressions of Putin, relations with Iran and Michael Jackson.

On Iran, Obama reiterated recent statements about the post-election protests there.

"Events in recent weeks have disturbed the world. They are not only heartbreaking, but raise questions over where leaders want to take the country," Obama said. "We have to wait and see how the dust settles. But we have to speak out and say that the Iranian people have to be treated with justice."

The president also spoke about the legacy of Michael Jackson, on the day of the pop star's public memorial program.

"No doubt he was one of greatest entertainers of our or any generation. Like Elvis, Sinatra, the Beatles, he became core part of our culture," Obama said. "His extraordinary talent and music was mixed with big dose of tragedy in private life. It is important for us to affirm the best of him."