ANCHORAGE, Alaska (CNN) -- Sarah Palin's not a quitter, she wants the public to know. 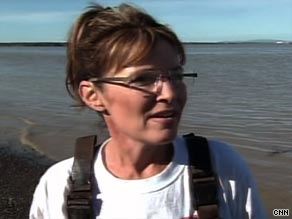 Sarah Palin's attorney said there is no legal reason that compelled her to resign as governor.

"I am not a quitter. I am a fighter," Palin told CNN on Monday while on a family fishing trip, on the heels of her Friday bombshell announcement that she was resigning as Alaska's governor.

Palin did her interview standing on the shores of Dillingham, Alaska, wearing waders. She granted 10-minute interviews to CNN and three other news networks Monday.

She resigned because of the tremendous pressure, time and financial burden of a litany of ethics complaints in the past several months, she said. The complaints were without merit and took away from the job she wanted to do for Alaskans, Palin said.

The decision to resign a year and a half before her term ends, and her rambling, often-disjointed resignation speech Friday, fueled days of debate among political analysts.

Speculation has run rampant that Palin, the Republican vice presidential candidate in 2008, will seek the presidency in 2012.

When pressed about her future, Palin would say only that she would work in public service. She did not rule out a run for the White House or any other political office.

Palin is to leave the governor's office in late July.

The days since her resignation had been exhilarating and she loved being in Dillingham, a town of only a few thousand people and no cell phone service, Palin said.

On Monday, her personal lawyer also spoke about her resignation.

No legal "bombshell" or personal scandal lies behind Palin's resignation, but off-color jokes by talk-show host David Letterman contributed to her decision to step down, Thomas Van Flein said.

The governor needed a break after being "on duty now for two and a half years solid," he said.

"There is no bombshell. There is no shoe to drop. There are no investigations of any type that I'm aware of -- no IRS audit, no federal investigation, no state investigation," Van Flein told CNN. "There is no legal reason in terms of a legal problem that compelled the governor to resign."

Friday was "deliberately chosen" for the announcement because of its proximity to the July Fourth holiday, Van Flein said: "She declared her independence from politics as usual."

Palin reiterated that statement in her interview.

Rep. Les Gara, an Anchorage Democrat and a frequent Palin critic, said everyone was "wildly surprised" by Palin's announcement.

"A lot of us were pretty disappointed in the concept that she can't finish out a governor's term," Gara said. Palin's resignation speech was "kind of similar to everything that has gone wrong since the governor has gotten back from her vice presidential campaign," Gara said.

"When she came into office, everything was about openness and transparency, and now everything's about excuses," he said.

But Rep. Jay Ramras, a Fairbanks Republican who leads the state House Judiciary Committee, said when it comes to public opinion, "The concrete hasn't set up yet."

"Those that seem to have responsibilities to manage businesses that manage people seem to be much less tolerant of what she did," Ramras said after attending Independence Day events over the weekend. Those people consider her "a quitter," he said.

"And then there's another group, where Gov. Palin has been successful in being able to imply -- and certainly these people have inferred -- that she was a victim."

The 45-year-old governor had faced intense scrutiny since Sen. John McCain picked her out of relative obscurity to be his running mate last year. Though her acceptance speech drew rave reviews, her subsequent shaky performance in network news interviews, the drama surrounding her 18-year-old daughter's pregnancy and two ethics probes into her earlier firing of the state's public safety director dogged her throughout the rest of the campaign.

"In my opinion, she was the national campaign for Republicans last fall," Van Flein said. "I know John McCain was the candidate, but the decision was really about Sarah Palin and could she take on Obama. That was a lot of weight on her shoulders to carry that campaign, and they almost pulled it off."

As Election Day neared with McCain trailing in the polls, campaign aides began sniping at Palin as a "diva" who ignored top advisers and lacked "fundamental understanding" of key issues in the race. The McCain-Palin ticket ultimately lost to Democrats Barack Obama and Joe Biden last November.

Van Flein also said Palin would remain involved in public service, with no other decisions made at this point. But Gara said it was clear to him that Palin has her eye on another bid for national office.

"We can all guess," he said. "My guess is the governor wants to be president, and that's what she should have said at her press conference."

Palin thought she would stop being a "lightning rod" once she returned to Alaska, but "it never really did simmer down," Van Flein said. Ethics complaints from critics led to her paying back taxes on state per diem funds she received while living at her home in Wasilla, outside Anchorage; another investigation led to her paying about $8,100 in travel expenses for her children.

Van Flein said the state's ethics process, which Palin signed into law, has been "abused" to harass her and may lead Alaskans to ignore more serious allegations. And he said Letterman's early June joke about one of her daughters being "knocked up" by New York Yankees outfielder Alex Rodriguez "demonstrated to her that there's some sort of disconnect here."

"When people don't accept normal bounds of decency making jokes like that about children, maybe this is not good for the state right now," Van Flein said. "And maybe somebody else who is not the subject, and whose family is not the subject of this scrutiny, can move the state forward."

Letterman said the joke was aimed at Palin's older daughter, Bristol, who had a son with her high-school boyfriend in December. However, Palin was in New York traveling with her 14-year-old daughter Willow at the time, and she accused Letterman of making jokes about sex with an underage girl.

The CBS "Late Show" host ultimately apologized, saying "If you have to explain the joke, it's not a very good joke."

Despite leaving office about two-thirds of the way through her term, Palin "is not a quitter," Van Flein said. He added that she "already accomplished her major goals," including winning legislative approval for a massive natural gas pipeline.

But Ramras, who calls himself "a pro-development, conservative Republican," called that assertion "crazy." Though the pipeline project won approval in the state Legislature, Alaska has yet to establish a "durable and predictable" financial structure that will get producers to commit to the plan.

"Anyone who thinks we've started anything is delusional. ... What she did was she created a Gordian knot and then handed it off to someone else," he said.