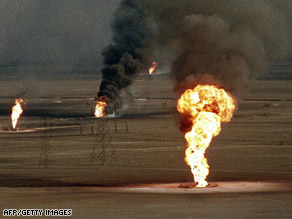 Now Iraq's foreign minister says his country "will not regain full sovereignty and independence without getting rid of these resolutions."

Speaking to reporters in Washington, Hoshyar Zebari said Monday that Iraq has paid "billions" of dollars under Chapter 7 of the U.N. sanctions placed on Iraq as a result of the 1990 Iraq invasion of Kuwait and subsequent war.

The U.N. Security Council is reviewing the sanctions, and Zebari said he had "intensive discussions" in New York with members of the Security Council. He said "I think the outcome is positive."

"We felt a great deal of good will that, really, time has come for Iraq to get rid of all these restrictions and to regain its international standing and position as a normal country."

The Iraqi foreign minister said bringing Iraq out of Chapter 7 is an "American commitment also" since Iraq signed the status of forces agreement with the United States, which governs the presence of U.S. forces in Iraq, based on its understanding that the U.S. would help Iraq to come out of Chapter 7.

Foreign Minister Zebari said the sanctions impose a heavy burden on Iraq -- it continues to pay 5 percent of its oil revenues to Kuwait, down from the initial 30 percent.

Iraq's security forces, he told reporters, have "proven they are capable of defending themselves and the country." In the next six months, however, he said, the country faces some risks.

"What can be seen as problems could become crises unless this administration keeps its focus and support to push the situation forward; otherwise this overall strategy of responsible redeployment could be undermined."

If that happens, Zebari said, it "will impact what the U.S. is doing in the Middle East, in the Arab peace process, with Iran, even in Afghanistan because Iraq is such a crucial player in the region."

All About Iraq • United Nations