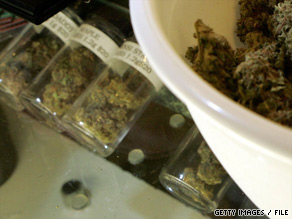 About 80 percent of people voting in the Oakland election approved the new medical marijuana tax.

About 80 percent of voters chose to impose the tax on Oakland's medical marijuana facilities, according to the Alameda County Registrar of Voters.

Some celebrated the news at Oaksterdam University by hand-rolling large marijuana cigarettes or stuffing cannabis into pipes. The school trains students for work in the medical marijuana industry.

"It is important because the city of Oakland is facing a massive deficit like many jurisdictions in California," said Steve DeAngelo, a leader of one of the city's cannabis clubs. "And we decided to step up to the plate and make a contribution to the city in a time of need."

DeAngelo, one of the people who led the effort to get the tax approved, said his business will now have to pay more than $350,000 from the new tax next year.

Oakland's City Council was also behind the move.

"Given that the medical cannabis dispensaries are something that was legalized in California, why not have revenue from it?" said councilwoman Rebecca Kaplan.

There was no formal opposition to the effort, but some drug fighters say the tax sends the wrong message.

"The taxation of a federally unlawful drug is just not something that the community should accept," said Paul Chabot of the Coalition for a Drug Free California. "With the state in dire straits in finances and the country looking for ways to pay down debt, looking at illegal drugs is the absolute wrong thing to do."

These facilities would have to pay about $18 in taxes for every 1,000 in marijuana sales.