WASHINGTON (CNN) -- North Korea's rhetoric toward the United States has always had a certain bizarre, over-the-top quality to it. Under the Bush administration it labeled Undersecretary of State John Bolton "human scum." 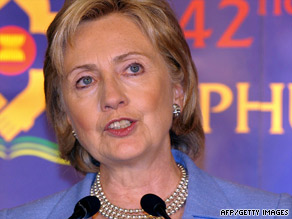 "Complete and irreversible denuclearization is the only viable path for North Korea," Hillary Clinton says.

But the North Korea's latest comments about Secretary of State Hillary Clinton are stunningly personal.

An unnamed North Korean official quoted by the state-run KCNA news agency calls Clinton "by no means intelligent" and a "funny lady."

"Sometimes she looks like a primary schoolgirl and sometimes a pensioner going shopping," he said.

The remarks seem to be a reply to Clinton's comments to ABC News in which she compared North Korea's leadership to "small children and unruly teenagers and people who are demanding attention."

Behind the scenes, U.S officials for months have made similar comparisons, claiming the Pyonyang's modus operandi is to be deliberately provocative, to "act out" to get the United States' attention and be rewarded for its "misbehavior."

This time, they say, it's not going to work. Clinton said Pyonyang has "no friends left."

Significantly, the resolution was supported by Russia and China, countries that have been reluctant to impose strict sanctions on North Korea.

"Complete and irreversible denuclearization is the only viable path for North Korea," Clinton said at the Association of Southeast Asia Nations meeting in Thailand this week.

"We do not intend to reward North Korea just for returning to the table, nor do we intend to reward them for actions they have already committed to taking and then reneged on. The path is open to them, and it is up to them to follow it. Unless and until they do, they will face international isolation and the unrelenting pressure of global sanctions."

North Korea, however, says the six-party talks with the United States, South Korea, Russia, China and Japan are dead and it's not going back. The country has the right to a nuclear program, it says, since it must defend itself against possible attack from the United States.

With strong words on both sides, the standoff seems intractable.

Clinton maintains the door still is open to the North, but only if Pyonyang does what it already has committed to: resume talks and dismantle its nuclear program -- completely, irreversibly and verifiably.

"We have made it very clear to the North Koreans that if they will agree to irreversible denuclearization the United States, as well as our partners, will move forward on a package of incentives and opportunities, including normalizing relations that will give the people of North Korea a better future," she said.

"The U.S. is telling us to take off all of our clothes," he's quoted as saying. "The most important thing for us is sovereignty. Sovereignty, security, namely life, should be guaranteed. How can we barter life with money?"