WASHINGTON (CNN) -- The top U.S. commander in Afghanistan is expected to ask the Obama administration for additional troops and equipment, according to a senior U.S. military official familiar with Gen. Stanley McChrystal's thinking. 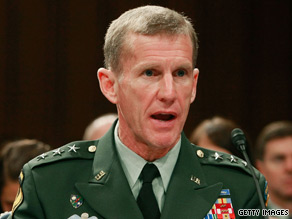 Gen. Stanley McChrystal's report on the war's status will be delivered in August, the source says.

The request will be for troops and equipment for conducting intelligence, surveillance and reconnaissance, as well as more assets to deal with roadside bombs and explosives, said the official, who declined to be identified because McChrystal's request has not been formally transmitted to the Pentagon.

The request could be made in coming weeks after McChrystal completes a "troop-to-task review" to calculate whether there are enough U.S. troops in Afghanistan -- and the right mix of troops -- to carry out the military's war plan at an acceptable level of risk, the official said.

The review could also lead to a request for additional troops for either combat or training of Afghan forces, but the official emphasized McChrystal has not made a decision on that. The military already has tasked an additional 4,000 troops to train Afghan forces.

The official said McChrystal is likely to submit his recommendations to Defense Secretary Robert Gates as a series of options, with each option having a level of risk attached to it.

"This will start the discussion" within the highest levels of the administration about whether to send a significant number of additional troops, the official said.

Gates has signaled he would be open to sending more troops if it could be demonstrated they are needed. But he also has expressed caution that the United States not send so many troops that it has too heavy a footprint in the country.

The troop-to-task review will follow McChrystal's assessment of the war, due 60 days after he took command in mid-June. That report is expected to be sent to Gates and NATO's secretary general by August 14, the official said.

It will discuss a detailed strategy for success of the counterinsurgency mission, such as the need for U.S. and Afghan forces to conduct more integrated operations and the need to focus on population centers. It is also expected to call for an increase in the number of Afghan security forces.

"This will be a really frank and honest discussion of how things are, and what it takes to get the job done," the official said.

All About Afghanistan War • Stanley McChrystal