WASHINGTON (CNN) -- President Obama often talks about all of the forces lining up against his health care plan. But there's one critic who has remained relatively mum in the debate. 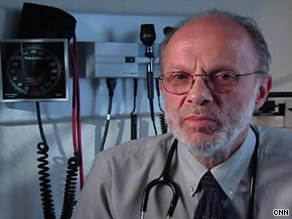 David Scheiner, a Chicago, Illinois-based doctor, has taken a hard look at the president's prescription for health care reform and sees bad medicine.

"This isn't that kind of health care program that I think is going to work," he said.

So what makes Scheiner so special? He was Obama's personal physician for 22 years, and voted for the former Illinois senator in the 2008 presidential election.

Scheiner thinks the president's plan doesn't go far enough. In his mind, the worst part of the proposal is that "private insurers continue to be a part of the health scheme."

Watch Scheiner talk about his objections »

Scheiner would rather see the nation adopt a single-payer system like the ones in Canada and Europe. The financing system relies on one "payer" -- which could be a government-run agency -- to fund all health care costs billed by doctors, hospitals and other health professionals.

The benefits, advocates say, is that pricey administrative costs are cut, resulting in large savings to patients.

It's something that an up-and-coming coming state Sen. Obama talked about six years ago.

But that position evolved during the campaign.

"If I were designing a system from scratch, then I'd probably set up a single-payer system. But the problem is we're not starting from scratch," Obama said in Albuquerque, New Mexico, in August 2008.

Now, the president favors giving Americans the option of joining a government-run plan that would compete with private insurers.

"Nobody is talking about some government takeover of health care. I'm tired of hearing that," Obama said in Raleigh, North Carolina, on Thursday.

But Scheiner says that nobody has seen the details of that option, making it a hard sell for the president.

Scheiner almost had a chance to confront the president with his concerns. He was invited to a recent televised town hall meeting with Obama, but he says he was dropped from the program.

"I just hope that the Congress, the American public and the president will hear some of my words," he said. "We've got to do something better."

Scheiner finally had a chance to have his say Thursday. He and other doctors who support a single-payer system gathered in Washington to meet with lawmakers and rally supporters.

He may not be the president's doctor anymore, but Scheiner says he's trying to save the patient before it's too late.

CNN's Ed Hornick and Brittany Cummings contributed to this report.