Poll: Did Obama's reaction to Gates arrest hurt him? 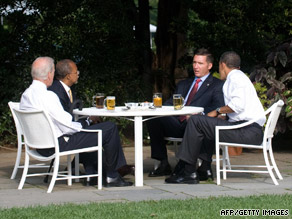 The arrest sparked a national discussion on the issue of racial profiling, which was amplified when President Obama weighed in on the matter.

In a prime time news conference on July 22, Obama said "the Cambridge police acted stupidly in arresting somebody when there was already proof that they were in their own home."

Fifty-four percent of people questioned in the poll said they don't think Cambridge, Massachusetts, police office James Crowley acted "stupidly" when he arrested Gates at the professor's home after Crowley responded to a call that someone was breaking into the house.

Two days after Obama's remarks, after criticism from police unions and after speaking with Crowley, Obama said "because this has been ratcheting up, and I obviously helped to contribute ratcheting it up, I want to make clear that in my choice of words, I think, I unfortunately gave an impression that I was maligning the Cambridge Police Department or Sgt. [James] Crowley specifically and I could have calibrated those words differently. And I told this to Sgt. Crowley."

Fifty-four percent of people questioned said they think the president acted stupidly when he commented on the Gates arrest, with 32 percent disagreeing. But again, the poll indicates a racial divide, with 63 percent of whites feeling Obama acted stupidly and 26 percent of black respondents agreeing.

Sixty-one percent approve of how the president has handled race relations, with 92 percent of African-Americans and 56 percent of whites approving.

"One-third of whites say that Obama's comments about this matter made them feel less favorable toward him, compared to only 4 percent of whites who feel more favorably toward Obama due to his comments," said CNN Polling Director Keating Holland. "But the majority of whites say that Obama's comments did not affect their views of him, and most whites approve of how Obama is handling race relations."

Sixty-six percent of whites said a white homeowner would have been arrested for the same behavior. Twenty-five percent of blacks agree.

"That difference may be due to life experiences -- more than half of blacks say they have been treated unfairly by the police because of their race, but only a handful of whites report the same kind of treatment," Holland said.

The poll indicated that both blacks and whites believe Friday's "beer summit" at the White House, in which Obama was host at a meeting with Gates and Crowley, was a good idea. But was it a "teachable moment," as mentioned by the president?

"Not according to the public -- blacks and whites agree that the whole controversy did not teach Americans a lesson that will lead to better race relations," Holland said.