(CNN) -- Democrats are accusing Republicans of organizing "angry mobs" to disrupt town hall meetings across the country, but conservatives say the protests are a sign of the opposition to President Obama's health care plans. 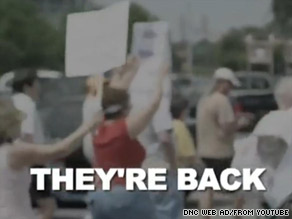 The DNC released a Web ad charging the Republicans have "called out the mob."

The Democratic National Committee released a Web video Wednesday charging that Republican operatives "have no plan for moving our country forward, so they've called out the mob."

The ad says "desperate Republicans and their well-funded allies" are trying to "destroy President Obama."

Obama had originally asked Congress to send him health care legislation before the August recess, but lawmakers were unable to reach an agreement on a plan. The House of Representatives recessed last week, and the Senate heads home at the end of this week.

As legislators return to their home states and hold town hall meetings, some have been met with hecklers and hostile opponents of the Democrats' health care proposals.

Rep. Lloyd Doggett, D-Texas, was badgered by a crowd in Austin this weekend over his support of Obama's health care plans. An angry group repeatedly shouted, "Just say no!" and some protesters carried posters with devil's horns added to a picture of Doggett.

"In my 15 years of hosting 'Office Hours' at neighborhood groceries and similar locations to talk with my constituents in Central Texas about the issues they care about, at times, I have engaged in vigorous discussion and even a heated argument or two.

"But I have never had neighbors cut off with the Republican-organized mob-type conduct of last Saturday," Doggett told CNN in a statement.

"After engaging this Republican crowd for an hour of explaining the health care bill and listening to their objections and taunts, the 'just say no' crowd, insisted upon silencing their neighbors by blocking a store entrance and yelling at the top of their lungs."

Rep. Steve Kagen was shouted down by protesters at events he held over the past week in his home state of Wisconsin. Democratic Sen. Arlen Specter and Health and Human Services Secretary Kathleen Sebelius also faced boos from opponents at a town hall meeting Sunday in Philadelphia, Pennsylvania.

White House press secretary Robert Gibbs said Tuesday that he thinks the anger some of the congressmen have experienced is manufactured.

"In fact, I think you've had groups today, Conservatives for Patients Rights, that have bragged about organizing and manufacturing that anger," he said Tuesday.

Conservatives for Patients Rights is one of several groups that has a list on its Web site of upcoming town hall meetings. But the group denies that it's manufacturing anything.

"The White House is desperate for a scapegoat to blame for their failure to convince Americans to let the government take over health care," spokesman Brian Burgess said Tuesday.

The memo, which MacGuffie said has been around for a few months, encourages participants to "rock the boat early" and put the representative on the defensive. "Don't carry on and make a scene -- just shout intermittent shout-outs."

He told CNN's Candy Crowley that he wrote the memo for grassroots activists in Connecticut.

Organizing for America, Obama's political wing, is planning strategy for such protesters at an event Vice President Biden is holding in Detroit, Michigan, on Wednesday. The group sent its activists in Michigan an e-mail encouraging them to "stand with the vice president and against the angry mobs being directed by Republican operatives in Washington to disrupt events throughout the month of August."

DNC spokesman Brad Woodhouse charged Tuesday that mobs are being transported to rallies by "well- funded, highly organized groups run by Republican operatives and funded by the special interests who are desperately trying to stop the agenda for change the president was elected to bring to Washington. "

"This type of anger and discord did not serve Republicans well in 2008 -- and it is bound to backfire again," he said in a statement.

Gail Gitcho, spokesman for the Republican National Committee, said Tuesday, "In a remarkable example of callousness, the White House and Democrats have reduced the concerns and opinions of millions of Americans to 'manufactured' and have labeled them as 'angry extremists,' for voicing their opposition to President Obama's government-run health care experiment."

"Before heading into recess, the Democrats should have read the dozens of public opinion polls showing that a majority of Americans believe President Obama's government-run health care experiment is a bad idea. Are Democrats so out of touch that they are shocked to learn that Americans are concerned about their $1.6 trillion government-run health care experiment?"

Fifty percent of those questioned in a CNN/Opinion Research Corp. survey released Wednesday morning say they support the president's plans, with 45 percent opposed.

The battle over health care is registering with people across the country. According to the CNN/Opinion Research Corp. survey, more than half of all Americans have strong feelings regarding the health care debate, with about a third saying they strongly oppose Obama's plans and 23 percent strongly in favor.

The poll also suggests that those opposed to the plans may be more motivated to attend town hall meetings than those who support the proposals.

"On issues like this, intensity of opinion matters as much as numbers. Opponents of the president's health care reform seem to feel more intensely about it than Obama's supporters," said CNN Senior Political Analyst Bill Schneider.

The CNN/Opinion Research Corp. poll was conducted Friday through Monday, with 1,136 adult Americans questioned by telephone. The survey's sampling error is plus or minus three percentage points.