Commentary: Proud to be a 'wise Latina'

By Maria Hinojosa
Special to CNN 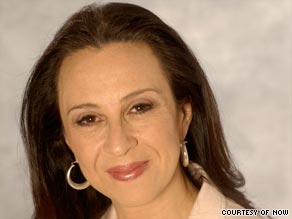 NEW YORK (CNN) -- It's a question I never thought I would ask my daughter. But I loved being able to ask it.

She cocked her head slightly and then quickly said, "I am a Wise Latina."

Eleven years old, and this is the vision she already has of herself. It's a pretty wonderful thing to watch that certain something blossom in a girl ... one of those often fleeting moments when a girl owns her own power.

For me, the decision to wear my own "Wise Latina" T-shirt raises all kinds of issues. It makes me confront a past that I have known for decades. Deep down inside, I, like many other Latinas, struggle with my own very deep insecurities in relation to my white male colleagues. I think after witnessing history on television for the past two weeks, those insecurities have pretty much dissipated.

Sonia Sotomayor has blazed the trail. I can't go back to thinking that way, anymore, ever.

Before, when I told people that I was a Latina, I never knew what, if any, image they might have in their mind. Everyone carries stereotypes and preconceived notions. But now when I say to people that I am a Latina, might they immediately think, "A wise Latina"?

My daughter is learning all of these lessons from Sotomayor, a Puerto Rican woman. When I was Yurema's age, back in the '70s, the only Puerto Rican woman I knew of was Maria (played by Natalie Wood) from "West Side Story." I grew up on the South Side of Chicago after being born in Mexico.

My Puerto Rican Maria from West Side Story taught me that love and commitment could transcend borders and divisions. Sonia is teaching Yurema, and all of us, that intelligence and compassion (and an honest way with words) can also cross all borders: political ones, those of gender or ethnicity.

And I have learned that my own challenge now is to reach this very high bar that Sotomayor has set. I must "own" that I am, indeed, a wise Latina.

Later on the day of the T-shirt decision, my daughter hears my reaction when I read that Sen. John McCain, whom my daughter knows well because we followed the election, is going to vote against Sotomayor's confirmation.

"What a big jerk!" was her age-appropriate response.

Then, after a pause, Yurema said, "So that means John McCain thinks Sarah Palin is a wise woman? But not Sonia? Harrumph."

"Harrumph" is also an age-appropriate response. But the lasting impact of McCain's decision will be much more profound than upsetting an 11-year-old wise Latina girl.

In fact, I would venture to say that, politically, there are many in the Republican Party who are convinced this was a politically unwise choice by McCain.

It's just not that complicated. Look at the changing demographics in the United States. Then think about what happens when you vote against the first Latina Supreme Court nominee.

Maybe McCain isn't wise enough to see that reality, so I will tell him a story about a Dominican-born, U.S. citizen cabby from my Harlem neighborhood.

While he drove down Broadway, I asked the cabby if he thought that President Obama was pandering to the Latino communities across the country with the Sotomayor nomination.

"Pero muchacha!" he exclaimed in a true Dominican style. "He is not pandering. He owes us! Everyone knows now that without the Latino vote, you cannot win the presidency. He has to deliver, politically. I am a new citizen, and I voted for Obama my first time. Just like a bunch of us Dominican cabbies. Now this is my country and my politics."

"And is that the way you guys talk amongst yourselves? That the Latino vote is that powerful?"

"Yep, asi lo vemos. That's how we see it! But even though we love Sonia, Obama still owes us."

And what must Obama deliver to satisfy this very politically astute cabby?

"Imigracion! He must solve this immigration problem. Families are divided up. It is unjust. So Obama must understand that is what we want him to deliver now."

A wise Latino with some wise advice for the president. And for McCain and the Republican Party?

Buena suerte, winning the next elections!

The opinions expressed in this commentary are solely those of Maria Hinojosa.

All About Sonia Sotomayor • John McCain • Hispanic and Latino Issues