WASHINGTON (CNN) -- A new national poll indicates that support among Americans for the war in Afghanistan has hit a new low. 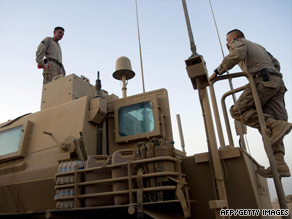 Forty-one percent of people questioned in a CNN/Opinion Research Corp. survey released Thursday say they favor the war in Afghanistan -- down 9 points from May, when CNN polling suggested that half of the public supported the war.

Fifty-four percent say they oppose the war in Afghanistan, up 6 points from May.

"Afghanistan is almost certainly the Obama policy that Republicans like the most," CNN Polling Director Keating Holland said. "Nearly two-thirds of Republicans support the war in Afghanistan. Three-quarters of Democrats oppose the war."

A record 44 United States troops were killed in Afghanistan in July, and 11 have been killed this month.

The CNN/Opinion Research Corp. poll was conducted July 31 through August 3, with 1,136 adult Americans questioned by telephone. The survey's sampling error is plus or minus 3 percentage points.