Analysts predict billions in benefits from 'Cash for Clunkers'

WASHINGTON (CNN) -- The "Cash for Clunkers" program will continue with a $2 billion supplement that some analysts say could provide a boost of billions of dollars more as it reverberates through the economy. 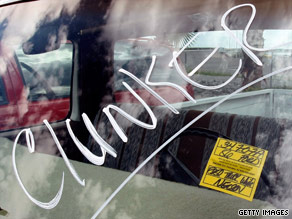 This gas guzzler was traded in at a Ford dealership in Las Vegas, Nevada, for a more fuel-efficient car.

Critics, however, say the program merely shifts consumer spending from one area to another.

The program provides consumers a cash rebate of up to $4,500 when they turn in older, gas-guzzling vehicles and buy newer, more fuel-efficient ones.

Congress passed the $2 billion expansion after reports that the original $1 billion earmarked for the program would soon run out. According to some estimates, the total of $3 billion in the Cash for Clunkers program could result in an $18 billion boost to the overall economy.

Under the program, vehicles purchased after July 1 are eligible for refund vouchers worth $3,500 to $4,500 on traded-in gas guzzlers. The trade-in vehicle has to get a combined city and highway fuel economy rating of 18 miles per gallon or less.

According to government figures, compact cars and hybrids have been the top choices so far for people taking advantage of the program.

Auto industry experts estimate that 750,000 clunkers will be scrapped as a result of the program, leading to the sale of 750,000 new cars.

Executives at auto companies have said that probably only about half of those vehicles would have been purchased if the program did not exist.

Critics of the program, however, argue that consumers who spend money on new vehicles will have less money to spend on other items, so the program won't do anything to add to economic activity and wealth.

But supporters argue there is another upside, saying that the cost of maintaining clunkers also is a drain on household budgets.

In addition, they say, consumers are likely to save more than $1,000 a year on gas, depending on how gasoline prices move, due to the improved fuel economy standards mandated by the program.

That could mean that the impact of Cash for Clunkers will continue even after the program eventually ends.