WASHINGTON (CNN) -- White House economic adviser Christina Romer declared the president's stimulus plan "absolutely" is working to slow the economy's decline, though she still held open the possibility of a second stimulus package a few months down the road. 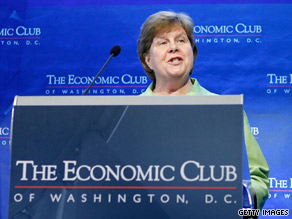 Ahead of Friday's new unemployment figures that had unexpectedly good news that the recession may be ending, Romer said the president's stimulus absolutely is working but still left open possibility of a second stimulus in a few months if the recovery is slow.

Romer, chairwoman of the Council of Economic Advisers, said Thursday that the stimulus package has helped "change the trajectory" in the economy by cushioning what would have been a much steeper fall without drastic government intervention.

"In other words, after we administered the medicine, an economy that was in free fall has stabilized substantially, and now looks as though it could begin to recover in the second half of the year," Romer told The Economic Club.

She said the program needs more time to work.

But Romer added the possibility of another stimulus package: "That said, if we come to the end of the year, if we're not seeing the kinds of results that we anticipate ... we'd start thinking about other things that need to be done."

Meanwhile, Romer treaded carefully when asked if there is any wiggle room on the president's campaign promise that nobody in the middle class will see any tax increases during his time in office.

"Can I go now?" Romer said to laughter from the crowd.

Mindful that two of her colleagues on the economic team, adviser Larry Summers and Treasury Secretary Tim Geithner, recently kicked up a controversy by leaving the door open on a possible tax hike, Romer tried to slam it shut.

"You know the president has made it very clear through the campaign that middle-class families have really gotten a bum deal, not just in this recession but probably for at least the last 10 years, and that's why he does not want to do anything that burdens middle-class families," Romer said. "And obviously no one is talking about raising taxes."

Another one of Romer's colleagues on the White House money team, Jared Bernstein, will be a guest on the "44 with Ed Henry" radio show at CNN.com on Friday at 11 a.m. ET, shortly after the new unemployment numbers are revealed.