WASHINGTON (CNN) -- A national poll released Monday indicates the Democratic Party is becoming less popular with voters but suggests that Republicans haven't been able to capitalize on the Democrats' downturn. 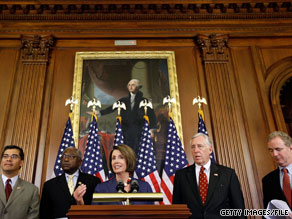 Fifty-two percent of people questioned in the CNN/Opinion Research Corp. survey said they have a favorable opinion of the Democratic Party, down 6 percentage points from February.

Forty-one percent said they have a positive view of the Republican Party, up 2 percentage points from February.

According to the survey, 44 percent said the country would be better off if the Democrats control Congress, with 34 percent saying it's better if the Republicans were in charge.

"By a 10-point margin, Americans say that the country would be better off if the Democrats controlled Congress. That's down from a 15-point advantage in April, but it is very important to note that the change has not helped the Republicans at all," Holland said.

The poll's release comes as lawmakers from Congress are holding town halls on the overhaul of health care.

What senators and representatives do this year in the health care debate could affect next year's congressional elections when all 435 seats in the House of Representatives and more than a third of the Senate are up for grabs.

"What happens in the 2010 midterm elections will ultimately be determined by events that happen in 2010," Holland said. "But this year's debate over health care is laying the groundwork for next year's actions. With the debate already so intense on this issue, voters are unlikely to forget what happens in the next few months."

The CNN/Opinion Research poll was conducted July 31-August 3, with 1,136 adult Americans questioned by telephone. The survey's sampling error is plus or minus 3 percentage points for the overall sample.