(CNN) -- Most Congress members conducting town hall meetings this month have chosen a noncombative posture to deal with angry participants who disrupt the proceedings. Not Rep. Barney Frank. 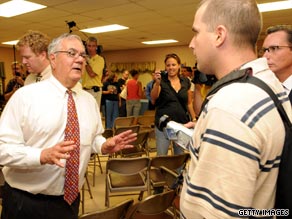 At a lively two-hour meeting Tuesday night in Dartmouth, Massachusetts, Frank gave as good as he got in confronting opponents of overhauling the nation's health care system.

The crowded hall had both supporters and detractors, but the opposing side was much louder and more raucous, booing the Massachusetts Democrat from the moment he was introduced and shouting questions and challenges at him throughout.

"You want me to talk about it or do you want to yell?" he asked over and over when interrupted while trying to answer. Continued shouting brought a sterner rebuke.

"Disruption never helps your cause," he said more than once. "It just looks like you're afraid to have rational discussion."

While Frank attempted to respond to all questions, he gave up when one woman compared health care proposals favored by Frank and President Obama to policies of Nazi Germany.

"When you ask me that question, I'm going to revert to my ethnic heritage and ask you a question: On what planet do you spend most of your time?" Frank asked.

"You stand there with a picture of the president defaced to look like Hitler and compare the effort to increase health care to the Nazis," he said, adding such behavior demonstrated the strength of First Amendment guarantees of what he called "contemptible" free speech.

"Trying to have a conversation with you would be like trying to argue with a dining room table," Frank said to the woman. "I have no interest in doing it."

Despite the disruptions, the meeting covered many of the issues of the health care debate, with Frank shooting down rumors that a House health care bill would mandate free insurance coverage for illegal immigrants.

He read from the section of the bill that excludes payments for that purpose, and when another questioner referred to a different section guaranteeing nondiscrimination, Frank pointed out that the first section he read superseded that language.

Some in the crowd applauded, but others booed and shouted. Frank asked why the detractors shouted for him to answer, and when he did, they shouted more.

"What's the matter with you all?" he said. "I don't know if you get angrier when I answer the questions, or when you don't think I do."