By Ted Sorensen
Special to CNN 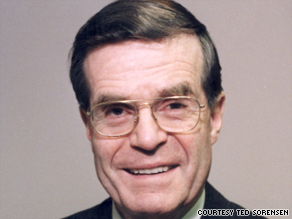 Ted Sorensen says the Kennedys are not American royalty, but have dedicated themselves to service.

NEW YORK (CNN) -- With the death of John F. Kennedy's brother, Senator Edward M Kennedy, and their sister, Eunice Shriver, the founder of the Special Olympics for the developmentally challenged, there has been a wealth of news stories -- obituaries and otherwise -- about the recurring tragedies endured by what some call America's "royal family."

All of these comments are well intended but off the mark.

The Kennedys have been a remarkable family since its founding roughly a century ago by Joseph P. and Rose Fitzgerald Kennedy. But, its members have never asked for pity or privilege. Their history has emphasized more success than tragedy. Their love of family and country stood out during some of the most cynical and selfish periods in recent American history.

Nevertheless, the members of that family have never considered themselves "royal" or entitled to special privileges. We have no royalty in America, but ever since the Adams family sent several generations to public service in the earliest days of our nationhood, other families have demonstrated similar interests and commitments to public service.

The Kennedys were taught as children and genuinely believed that American citizenship was a special privilege and honor, in return for which every citizen had an obligation to serve and help the country. Even the youngest generation of Kennedys today acts not out of a sense of entitlement but a sense of commitment.

From the beginning, those members of the family who held or sought public office had the courage to take public positions on controversial issues, not always approved by the leaders of their party, church or respective constituencies. Nevertheless, they stood up and spoke out for what they believed was right, regardless of political and personal consequences. In short, they have had a proud tradition of becoming -- not merely writing about -- profiles in courage.

As the result of the elder Joseph P. Kennedy's success in business, many of his descendants could have lived lives of luxury and ease. After all, they liked family fun, in the sun, on the water, sometimes competing with as well as teasing each other.

'Teddy: In His Own Words'

CNN will air the HBO documentary "Teddy: In His Own Words," chronicling the senator's life from his childhood through his speech at the 2008 Democratic National Convention. It includes rarely seen archival footage.
Tonight, 7 ET

Yet, they devoted and donated more of their valuable time than most families to the service of others, their country, their communities, and those who did not have their good fortune, good education and good opportunities to lead.

President John F. Kennedy was their star, their pride, their model and their leader. But his siblings, Robert, Edward, Eunice, Pat and Jean all played their own special roles, making their own special contributions throughout their lives.

This country has long been a wealthy country, with all its wealth of brilliant and devoted leaders and traditional ideals. But it would have been a much poorer country without the Kennedys.

The opinions expressed in this commentary are solely those of Ted Sorensen.