WASHINGTON (CNN) -- Facing a recent erosion of public support for health-care overhaul, President Obama lashed out at his opponents Saturday for spreading "outrageous myths" on the Internet, television, and at town hall forums. 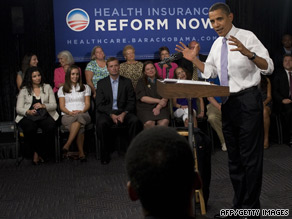 Republican leaders, in turn, said it was Obama who is guilty of playing "fast and loose with the facts."

They repeated their assertion that the president's proposed government-funded public health insurance option would destroy the current private insurance-based system.

"I'm glad that so many are engaged," Obama said in his weekly radio address. But it should "be an honest debate, not one dominated by willful misrepresentations and outright distortions, spread by the very folks who would benefit the most by keeping things exactly as they are."

Obama emphasized that, contrary to the assertions of many, illegal immigrants will not get health insurance under a reform plan.

"That idea has never even been on the table," he said.

He said the charge that funding for abortions would be mandated is false, as is the notion that federal "death panels" would be established to discourage care for the sick and elderly.

The health-care bill advanced in the House of Representatives would include coverage of end-of-life counseling for Medicare beneficiaries who want it. The provision was recently dropped, however, by Senate negotiators.

Obama asserted that his plan would not lead to "a government takeover of health care," and said the proposed public option is just "one idea among many to provide more competition and choice."

Republican Rep. Tom Price of Georgia had a different take.


"The plan being promoted by the White House would give Washington the power to make highly personal medical decisions on behalf of patients -- on behalf of you," Price, a former physician, said in the weekly GOP address.

Obama "has also said that he thinks the government should compete with your current health care plan.

"But we all know that when the government is setting the rules and is backed by tax dollars, it will destroy -- not compete -- with the private sector. The reality is, whether or not you get to keep your plan, or your doctor, is very much in question under the president's proposal," Price said.

Price also argued that under Obama's plan "every health care plan will have to meet a new federal definition for coverage -- one that your current plan might not match, even if you like it."

Price urged a "bipartisan solution that puts patients in charge" and rejects "a government-centered approach."

The latest charges and countercharges came after another week of highly publicized arguments among congressional Democrats over the political viability of a public health option.

One of the top Senate negotiators, Sen. Kent Conrad, a North Dakota Democrat, has insisted that a public option cannot get the 60 votes required to overcome a Senate filibuster.

House Speaker Nancy Pelosi asserted Thursday that a bill cannot pass the House of Representatives if it does not include a public option.

The No. 2 Democrat in the House, however, seemed less definitive. Majority Leader Rep. Steny Hoyer, D-Maryland, told reporters Friday on a conference call, "As I've said in the past, I'm for a public option but I'm also for passing a bill. ... But, you know, we'll have to see because there are many other aspects of the bill as well."

The public option has been cleared by three committees in the House as well as by the Senate Health, Education, Labor, and Pensions Committee.

But a bipartisan group of six negotiators on the Senate Finance Committee -- the last committee that needs to clear health-care legislation before it can be taken up on the Senate floor -- is considering dropping a public option in favor of nonprofit cooperatives that would negotiate collective polices for members.

Some top Democrats have responded in recent days by hinting that they may instead try to short-circuit the traditional Senate legislative process by passing a health-care bill through an obscure tactic known as reconciliation, a type of budget maneuver that requires only a simple majority -- 51 votes -- to pass.

Such a maneuver would boost the prospects for Senate passage of a public health option. But Republicans have equated such a move to legislative warfare.