By Bill Frist
Special to CNN

Editor's note: Bill Frist is the former Republican majority leader of the U.S. Senate and a professor of medicine and business at Vanderbilt University. 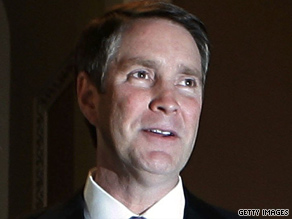 Bill Frist recalls Sen. Edward "Ted" Kennedy's caring and concern for the young and the poor in America.

(CNN) -- The telephone rang in the deep hours of a dark night after a heavy day for our family.

My mother, affectionately known as Dodie, had passed away just a few hours after my father had passed, the two dying of independent causes.

The call -- the first that my wife, Karyn, and I had received from any of our friends or Senate colleagues -- was from Ted and Vicki Kennedy. That is caring and that is love.

Imagine being in Nantucket with your non-sailing sons with Ted, the master of the sea, skippering his beloved wooden sailboat over from Hyannis, asking the boys to jump aboard so he could take them on a harbor cruise and tell them a bit about why his brother John so dearly loved the United States of America.

He focused time and energy on the young and the importance their lives will play in meeting the challenges of today and tomorrow.

You see, in our lives Ted Kennedy was more than the legislative lion of the Senate.

He was the young senator I first met as a college intern in 1972 as he patiently found the time to lay out the fundamentals of universal health care to our summer class.

He was the proud stepdad who with Vicki beat Karyn and me to every afternoon high school baseball game while our sons played side by side.

And he was the masterful legislative colleague who never sacrificed his liberal principles standing for the everyday person as we joined each other on the health committee as respective co-chairmen to write and pass bills on health care disparities among the poor, emerging infectious diseases such as HIV and avian flu, and preparing the nation and the world to fight bioterrorism.

His death is a loss not just for Massachusetts and the Senate, but for all of mankind.

The opinions expressed in this commentary are solely those of Bill Frist.