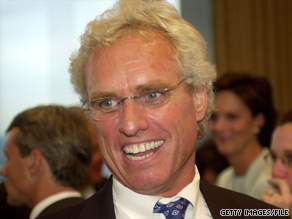 Former Rep. Joe Kennedy may try to launch a political comeback amid all the Kennedy nostalgia.

For the first time in 25 years, the state of Massachusetts has an open Senate seat. Nobody knows who will take it, but virtually everyone agrees that the fight to replace the Bay State's liberal lion is guaranteed to be fierce.

Massachusetts is essentially a one-party state. Democrats control the governorship and every congressional seat and have overwhelming majorities in both houses of the state legislature.

One unintended consequence of this monopoly is a lot of pent-up political ambition. Bay State Democrats itching to go to Washington usually have to wait -- for a long time. Kennedy won his Senate seat in 1962; John Kerry won his in 1984.

Massachusetts law requires a special election for Kennedy's seat to be held within 160 days.

A long-term vacancy could have effects far beyond Kennedy's home state of Massachusetts, since his death deprives Democrats of the 60-vote majority necessary to force laws through the Senate despite Republican objections.

Just last week, Kennedy urged that the law be changed to allow the governor to appoint a temporary replacement until the special election could be held. Gov. Deval Patrick on Wednesday told Boston radio station WBUR that he is in favor of the change and would sign it into law if the state legislature passed it.

When the special election is over, the winner will serve out the remainder of Kennedy's term, which expires in January 2013. A slew of local officeholders have nothing to lose and everything to gain by tossing their hats in the ring.

Start with the state's 10-member House delegation. With the exception of 72-year-old Rep. John Olver, each one is considered a possible contender, said Bill Mayer, a Northeastern University political scientist.

Rep. Ed Markey, a 17-term congressman from north of Boston, ran for Kerry's Senate seat in 1984. He also briefly aired television ads during his 2004 House re-election bid. Why? There wasn't a serious threat to Markey's House seat, but he wanted to raise his profile in the event of a Senate vacancy created by a Kerry presidential win over George W. Bush, Mayer said.

The one caveat for Markey today: He may not want to give up his chairmanship of an influential House committee dealing with climate-change legislation. The same goes for Rep. Barney Frank, who has plenty of name recognition but may not want to cede the helm of the powerful House Financial Services Committee.

Rep. Mike Capuano, now in his sixth term from Somerville, currently has the seat once held by President Kennedy and House Speaker Tip O'Neill. He took office in 1998 by edging out a 10-candidate primary field with 23 percent of the vote.

Capuano and others might try to follow that same blueprint for a statewide victory, Mayer said. As little as 20 percent may be enough to win a heavily contested Senate primary.

Capuano, Rep. Stephen Lynch from South Boston and Rep. Jim McGovern from Worcester might also bet that their stronger urban Democratic organizations can help them eke out a victory if the primary turnout is low.

Money is certain to be a key factor. Former Rep. Marty Meehan, now the chancellor of the University of Massachusetts at Lowell, has almost $5 million in contributions at his disposal that could be used for a Senate run.

Massachusetts Democrats might, however, decide it's time to turn the political page by sending a woman to the U.S. Senate.

The state's politically ambitious Attorney General Martha Coakley has the distinction of being one of the few women to win statewide. Rep. Niki Tsongas of Lowell, on the other hand, has the benefit of a famous name. Her husband -- former presidential candidate Paul Tsongas who passed away in 1997 -- represented Massachusetts for one term in the Senate from 1979 to 1985.

But the most famous name in Massachusetts politics is, of course, Kennedy. Ted Kennedy's widow, Victoria Reggie Kennedy, has so far expressed no interest in filling the seat, according to sources. Speculation is nevertheless rampant that she might ultimately try to keep the seat in family hands.

Former Rep. Joe Kennedy, who held Capuano's seat from 1987 to 1999, may also try to launch a political comeback on the strength of the current wave of emotion and nostalgia. The nephew of Ted Kennedy and son of Robert F. Kennedy, he currently heads Citizens Energy Corp., which provides home heating fuel for low-income Americans.

Massachusetts may be headed for its most hotly contested Senate race in at least a quarter century.