By John Avlon
Special to CNN

Editor's note: John Avlon is the author of "Independent Nation: How Centrists Can Change American Politics" and writes a weekly column for The Daily Beast. Previously, he was chief speechwriter for New York Mayor Rudy Giuliani and was a columnist and associate editor for The New York Sun. 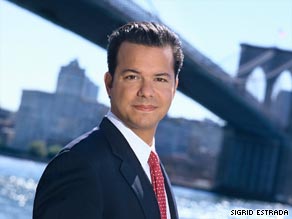 John Avlon says President Obama is losing his hold on the crucial independent bloc of voters.

NEW YORK (CNN) -- Over the course of this summer, President Obama's approval ratings have plummeted among independent voters -- the largest and fastest-growing segment of the American electorate.

In May, 66 percent of independents approved of Obama's job performance, according to the Gallup Poll.

By August, Gallup showed the president was supported by 49 percent of independents, a collapse during the health care debate that reflects independents' dislike of deficit spending, the growth of big government and one-party control of Washington.

It's a particular problem for Obama because post-honeymoon perceptions are hardening in ways that are counter to his core campaign promise to bridge partisan divides.

He won virtually every swing state in 2008 as well as 60 percent of centrists, won independents by an 8-point spread, and even won 20 percent of self-described conservatives. But right now he is presiding over a period of increased partisan polarization, with nearly 90 percent of Democrats supporting his efforts and 5 percent of Republicans doing so.

Independents hold the balance of power in American politics. Their ranks have rocketed during the Obama presidency as the two parties have become more polarized, hitting an unprecedented 41 percent of the electorate in July, according to a Washington Post/ABC News poll. At the same time, identification with both Democrats and Republicans has declined.

All this is evidence that Obama's election did not represent a liberal ideological mandate, as House Democrats and their partisan cheerleaders might wish. More than 70 percent of independents now disapprove of Congress.

But it also shows that rejection of the Republican brand has only accelerated since the conservative caricatures of Rush Limbaugh, Dick Cheney and Sarah Palin -- and the town hall protesters -- became the most prominent public faces of their party.

Independents are nonideological problem-solvers. They are sick of Washington's harsh and cynical hyper-partisanship, but they do not have a split-the-difference approach to politics.

To put it another way, they are fiscally conservative but socially progressive with a strong libertarian streak. And it's on fiscal issues that independents are putting Obama on notice.

Obama has consistently spoken about the need to return to fiscal responsibility but he's presided over an unprecedented growth in government spending -- from bailouts to the stimulus bill. There is a gap between his rhetoric and his record - and that's contributing to the fact that only 35 percent of independents support his efforts on health care to date.

That's why liberals' increasingly strident insistence that Obama abandon bipartisan outreach is terrible advice for the president and the nation. In a burst of triumphalism, they seem to be echoing former House Majority Leader Dick Armey's advice to Republicans in the past -- "bipartisanship is another name for date rape" -- despite the fact that it is exactly this hyper-partisan, play-to-the-base approach to politics that caused independent voters to abandon President Bush.

Health care reform is one of the most demonstrably difficult issues in American politics. It has been attempted by presidents since Harry Truman, and in each case a combination of fear-mongering from the right and all-or-nothing insistence from the left has derailed any hope of real progress.

In contrast, every major successful social reform -- from Social Security to Medicare to welfare reform -- has earned broad bipartisan support. For health care to pass in a durable form it must build on this tradition. Pushing through a party-line vote will backfire badly.

To regain his footing with independents, Obama needs to depolarize the debate over health care reform. He can do so by endorsing a bipartisan Senate bill that offers increased competition and coverage through nonprofit co-ops rather than the $500 billion to $1 trillion public option.

This will not be a retreat but real leadership toward uniting the country. Obama also needs to start addressing out-of-control costs by pursuing promised entitlement reforms for Medicare, Medicaid and Social Security in the name of generational responsibility. It would be a bipartisan effort based on fiscal responsibility -- and a courageous bit of political judo that would help him close the growing credibility gap with independents.

Washington's professional partisans have an interest in perpetuating play-to-the-base politics. They view the inspirational post-partisanship of Obama's 2008 campaign as a necessary ploy that should be abandoned once entering Washington.

What they don't appreciate is that for his independent supporters, the hope and change that Obama represented was a break from the hyper-polarized politics of the past. It's not too late for the president to regain this lost ground, but it is getting later than some in the White House might like to think.

The culture of hyper-partisanship persists, but a leader's responsibility is to change a culture. This will require reinforcing Obama's strained centrist credentials -- a clear commitment to moving our nation not left or right, but forward.

The opinions expressed in this commentary are solely those of John P. Avlon.