By Jim Wallis
Special to CNN

Editor's note: The Rev. Jim Wallis, a theologian, speaker, preacher and commentator on religion and public life, is the author of best-selling books including, "The Great Awakening, Reviving Faith and Politics In a Post-Religious Right America." He is president of Sojourners, which says its mission is "to articulate the biblical call to social justice," and he is editor-in-chief of Sojourners magazine. 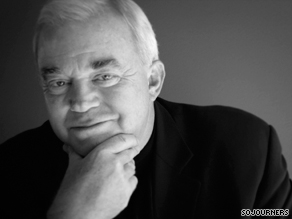 (CNN) -- In the aftermath of the 2004 presidential election, the Democrats were roundly accused of losing the "moral values voters" in America, and of being the party of secularists who were hostile to faith and religion.

The first Democrat to call me and ask to talk about that accusation and how to change the moral debate in America was Ted Kennedy. He invited me to his home, where he and his wife, Vicki, engaged me in a long and very thoughtful conversation into the night about the relationship between faith, morality and politics.

Their deep Catholic faith was evident and their articulation of it very impressive, especially the impact of Catholic social teaching on both of them. Our discussion was not partisan at all, i.e., not about how to "win religion back" for the Democrats. Rather, we focused on the great moral issues facing the nation, and how we as people of faith needed to respond to them.

On the occasion of his death, I pray that God may now move us as a nation to address the greatest cause of Sen. Kennedy's life -- the need for a comprehensive reform of the health care system in America -- as a deeply moral issue and one that calls forth the very best that is within us.

May we honor the life and death of Sen. Edward Kennedy by laying aside the rancor, lies, fear and even hate that has come to dominate the health care debate in America this summer, and regain our moral compass by recovering the moral core of this debate: that too many Americans are hurting and suffering in a broken and highly inequitable health care system, and that it is our moral obligation to repair and reform it -- now.

While he might not be with us as we continue on this road to reform, his life and legacy can still help show the way forward.

On October 3, 1983, Ted Kennedy surprised many in Washington by accepting the invitation of Dr. Jerry Falwell to come and speak at what is now Liberty University. Noting the seeming contradiction, he said, "They seem to think that it's easier for a camel to pass through the eye of the needle than for a Kennedy to come to the campus of Liberty Baptist College."

The divisive issue at the time was a nuclear freeze in the midst of the Cold War. He condemned those who called Falwell a "warmonger" and criticized a Harvard University audience that had booed and hissed at Falwell during a speech. He warned against all those who would distract from such an important debate by raising "phantom issues" and "false charges."

He challenged his audience and his political party by saying, "I hope that tonight and in the months and years ahead, we will always respect the right of others to differ, that we will never lose sight of our own fallibility, that we will view ourselves with a sense of perspective and a sense of humor."

America is a different place in 2009 than it was in 1983, but Sen. Kennedy's call for a better debate is needed as much now as it was then. And his comments at Liberty University have an obvious application to the current health care debate which has become one of the most rancorous in recent American political history.

Much of the commentary on the death of Ted Kennedy has focused on how powerfully he could reach across the aisle of American politics, win the respect, trust, friendship and even love of his political adversaries. Today, some of the most sorrowful of Kennedy's colleagues in Washington are Republicans.

Ted Kennedy showed you can have passionate and clear political commitments (nobody had stronger ones than he did) and, yet, still reach out to others with very different political views on the basis of shared moral values, love of country, and commitment to the common good.

We desperately need to heed his voice now: "I hope for an America where we can all contend freely and vigorously, but where we will treasure and guard those standards of civility which alone make this nation safe for both democracy and diversity." His hope should be our goal today.

The opinions expressed in this commentary are solely those of the Rev. Jim Wallis.