Kennedy remembered as an advocate for all

(CNN) -- One year before the day of his death, an ailing Sen. Ted Kennedy electrified a crowd of thousands at the Democratic National Convention. 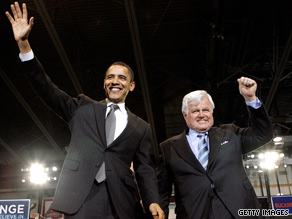 "There is a new wave of change all around us, and if we set our compass true, we will reach our destination -- not merely victory for our party, but renewal for our nation," Kennedy said on August 25, 2008.

"And this November, the torch will be passed again to a new generation of Americans, so with Barack Obama and for you and for me, our country will be committed to his cause."

Two months later, the election of the United States' first black president marked the actualization of decades of work for Kennedy, who was a champion of civil rights throughout his nearly 50-year tenure in the Senate.

In the 1960s, as civil rights battles raged across the country, it was Kennedy's brother, President John F. Kennedy, who sought passage of a landmark bill to ban discrimination.

And when JFK was assassinated, Ted Kennedy, already filling his older brother's Senate seat, filled his shoes, too, helping to push the legislation through.

Democratic Rep. John Lewis of Georgia, who worked closely with Kennedy on civil rights issues, said Kennedy was "our shepherd, he was our champion, he was our leader."

The first major speech Kennedy made on the Senate floor was in support of the 1964 Civil Rights Act, which banned discrimination based on race or gender in public places, schools and places of employment.

"He didn't have to do it. He was not from the heart of the American South ... but I think because of his upbringing, his faith, his passion, he would say over and over again, 'We must do what is right. It's the right thing to do. We have a moral obligation,' " Lewis said.

And even as his 1980 presidential bid came to an end, Kennedy kept his focus on equal rights.

"And we can be proud that our party stands plainly and publicly and persistently for the ratification of the Equal Rights Amendment," he said in the keynote address at the Democratic convention that year.

While the White House eluded his grasp, the longtime Massachusetts senator was considered one of the most effective legislators of the past few decades. In addition to the Civil Rights Act, Kennedy played a key role in passing the Voting Rights Act of 1965, the 1990 Americans with Disabilities Act and the 1993 Family and Medical Leave Act. He earned a reputation as an outspoken liberal standard-bearer during a conservative-dominated era from the 1980s to the early 2000s.

The senator pulled no punches when he felt civil rights might be in danger. In 1987, Kennedy led the opposition to President Reagan's nominee for the Supreme Court, Robert Bork. The senator was quick to warn that he thought Bork's conservative ideology would be dangerous for the country.

"In Robert Bork's America, there is no room at the inn for blacks and no place in the Constitution for women. And in our America, there should be no seat on the Supreme Court for Robert Bork," Kennedy charged. His effort was successful, as Reagan's nominee was rejected.

Sen. Chris Dodd, a close friend and colleague, said Kennedy spent his life fighting for justice for all.

"And so his biggest issue were those millions of people -- and that includes everyone, because everyone at some point or another in our lives needs an advocate. And you never could have a better one than Ted Kennedy. When he was in your corner, he was in it forever."

For many, it was fitting that Kennedy became an early supporter of Obama's presidential campaign, reaching out to all the groups he championed in the past to carry his civil rights legacy to the future.

"The work begins anew. The hope rises again. And the dream lives on," Kennedy said at the close of his convention address last year.

The morning after Kennedy's death, Obama acknowledged the personal role Kennedy played in helping him become president of the United States.

"I valued his wise counsel in the Senate, where, regardless of the swirl of events, he always had time for a new colleague. I cherished his confidence and momentous support in my race for the presidency. And even as he waged a valiant struggle with a mortal illness, I've profited as president from his encouragement and wisdom," the president said in a statement Wednesday morning.

"For five decades, virtually every major piece of legislation to advance the civil rights, health and economic well-being of the American people bore his name and resulted from his efforts."

Kennedy, Obama said, "picked up the torch of his fallen brothers and became the greatest United States senator of our time."