DORCHESTER, Massachusetts (CNN) -- Friends, family and colleagues paid tribute to Massachusetts Sen. Edward Kennedy on Friday evening with a three-hour wake capped by a chorus of "When Irish Eyes Are Smiling." 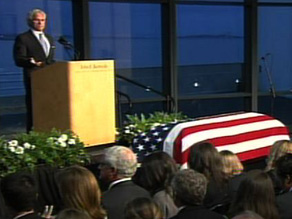 Joseph P. Kennedy II recalls how his "Uncle Teddy" looked after the family.

An estimated 45,000 people filed past the Democratic legend's flag-draped casket at the John F. Kennedy Presidential Library before the event. Connecticut Sen. Christopher Dodd, who has tried to shepherd Kennedy's signature cause of universal health care through the Senate this year, summed up his appeal in three words: "People liked him."

"Some people born with a famous name live off of it. Others enrich theirs," Dodd said. "Teddy enriched his."

Kennedy died Tuesday night at age 77 after being ill with brain cancer for 15 months. He had represented Massachusetts in the Senate since 1962, leaving his stamp on "nearly every important law passed in the last half-century," Dodd said.

He became the patriarch of the first family of Democratic politics after the assassinations of his brothers, President John F. Kennedy and Sen. Robert F. Kennedy, during the 1960s. One of Robert Kennedy's sons, former Rep. Joseph P. Kennedy II, fondly recounted how "Uncle Teddy" looked after the children of his slain siblings.

"The truth of the matter is that for so many of us, we just needed someone to hang on to, and Teddy was always there to hang on to," he said. "He had such a big heart, and he shared that heart with all of us."

The wake was held at the John F. Kennedy Presidential Library in suburban Boston, a building "that Teddy built and brought to life with his dedication to public service," said the slain president's daughter, Caroline.

Kennedy's own presidential aspirations were hobbled by the controversy around a 1969 auto accident that left a young woman dead and a 1980 primary challenge to then-President Jimmy Carter that ended in defeat. But while the White House eluded his grasp, he played major roles in passage of the Civil Rights Act of 1964, the Voting Rights Act of 1965, the 1990 Americans with Disabilities Act and the 1993 Family and Medical Leave Act.

"He constantly renewed my faith and optimism in the possible," Vice President Joe Biden said at the memorial. "I never once saw your father with a defeatist attitude, I never saw him petty. I never saw him act in a small way, and as a consequence he made us all bigger -- both his friends, his allies and his foes."

Kennedy was an outspoken liberal standard-bearer during a conservative-dominated era from the 1980s to the early 2000s. He died as President Obama, whom Kennedy boosted in the 2008 presidential campaign, is pushing for a wide-ranging overhaul of the U.S. health insurance system, a fight the dying senator called "the cause of my life" in a July issue of Newsweek.

Kennedy was famous for his close friendships with colleagues across the Senate aisle even as his name was an anathema in Republican campaign materials. Utah Republican Sen. Orrin Hatch said the Kennedy name was "my very best fundraiser," but that he developed "a strong working relationship with and love for the man I came to fight."

Watch Hatch tell how he won a big favor from Kennedy »

"If you would have told me that he would become one of my closest friends in the world I probably would have suggested that you need professional help," Hatch said.

A visibly emotional Hatch said he last saw Kennedy "a couple of months ago," and the two had their picture taken together.

"That means so much to me," Hatch said. "I had to say it was a wonderful occasion, and I miss fighting in public and joking with him in the background. I miss all the things we knew we could do together."

"He was the most reliable, the most prepared and the most persistent member of the Senate," McCain said. "He took the long view, and he never gave up."

McCain added, "I think most of my colleagues would agree the place won't be the same without him."

The senator's funeral is scheduled for Saturday at Boston's Our Lady of Perpetual Help Basilica in Boston's Mission Hill section, with at least 40 of Kennedy's fellow senators and former presidents Jimmy Carter, Bill Clinton and George W. Bush slated to attend.

Obama, who called Kennedy an "extraordinary leader" on Wednesday, will deliver a eulogy at the funeral, according to several sources. Prime Minister Brian Cowen of Ireland, the famous clan's ancestral homeland, and British Prime Minister Gordon Brown are also expected to attend, a family spokesman said.

Kennedy will be buried Saturday evening at Arlington National Cemetery, outside Washington, 95 feet south of the grave of Sen. Robert Kennedy, which is in turn just steps away from John Kennedy's burial site.