Commentary: Why I sang at Kennedy's wedding

By Maura O'Connell
Special to CNN 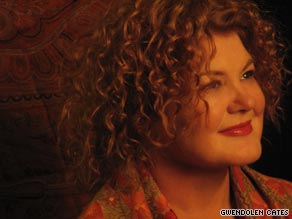 Singer Maura O'Connell says one of Ted Kennedy's favorite songs, "A Family Tie," spoke to his love of family.

(CNN) -- In 1992, I had the pleasure of singing at the wedding of Sen. Edward Kennedy to Victoria Reggie. I had never met him, nor was I aware that he had even heard of me. To say I was surprised would be an understatement.

He made the call himself to my home number. My housemate hung up on him, believing it was a hoax, but he eventually left a number for me to contact.

When we spoke the next day, he told me how much he enjoyed my singing and named particular songs that meant a great deal to him. One of those songs is "A Family Tie" by Hugh Prestwood, which speaks to the idea of unconditional love within a family.

I can only assume that it had particular resonance for him. We discussed the song and many others that were favorites of his and, of course, I agreed to sing at the wedding.

We spoke a few more times before the wedding and he sounded like any other man who was delighted to be marrying the woman he loved.

I was thrilled to be involved. The Kennedys have been a huge part of the Irish psyche since I was a child. In many houses back then, there were pictures of the pope and John F. Kennedy. The fact that he was proudly Irish was a huge boost for our national ego at the time.

My family had a very special photograph that was on top of our piano all my life. It was a picture of my father with Ted Kennedy that was taken in the early '60s at the Shannon Airport duty free store, where my father worked at the time. We were all very proud of that, so when I got the call about singing at the wedding, the first person I told was my dad.

On the day of the wedding, my musicians Richard McLaurin and Zane Baxter and I were brought to Kennedy's house and escorted to the senator's home office. There were so many iconic pictures on the walls it was disconcerting.

He made time to come and visit us and was about as genial a host as I have ever encountered. He talked about his bride-to-be in glorious terms, shared the story of his proposal to Vicki, and answered questions about the various pictures around the room. He was relaxed and happy.

The wedding itself was beautiful. It was just very close family. There was a civil ceremony and then a blessing. I sang some songs during the ceremony, and then a few afterwards. He joined in here and there, but God bless him, he hadn't a note in his head.

He had requested that I sing the old standard "You'll Never Know" which I had recorded, and he and his bride danced, looking into each other's eyes. He gave Vicki a painting of daffodils he had painted as a wedding gift. A few days later, a framed signed print of the painting was delivered to my home. What a thoughtful gesture.

Ever since then we kept in contact. They came to see me play at the Birchmere, a music hall in Alexandria, Virginia, a few times. I sang at various events the senator was involved in, most recently at a fundraiser for his re-election.

It was not a one-sided friendship though. A few years ago I accompanied my son to Washington to take part in a young leaders of America camp. I was a bit surprised when I found out there was to be no real interaction with any serving politician.

On the day that we were to tour the major sites, I decided to call Kennedy's office at the Russell Senate building. I explained to his wonderful assistant, Sharon Waxman, what I was doing in Washington and asked if the senator would mind waving at the hordes from his office window.

She called me back about 10 minutes later to say the senator had cleared some time in the afternoon, and he would speak to the group in the little park opposite the building. He spoke to the kids about his first time in Washington and how his brother John, a senator at the time, showed him around.

He told them how inspiring it was to see how government worked and that he knew right then that he wanted to be a public servant. He was playful, too, and told them lots of silly stories about his dog. Afterwards he agreed to be photographed with the group. I believe that many young people gathered there may have been inspired by his stories and may prove to be the next generation of humanistic Democrats.

He loved his country. He loved to serve, but most of all he dearly loved his wife and family. I will miss him, too -- even his singing.

The opinions expressed in this commentary are solely those of Maura O'Connell.