WASHINGTON (CNN) -- President Obama and top aides have quietly stepped up talks with moderate Republican Sen. Olympia Snowe of Maine on a scaled-back health care bill, according to two sources familiar with the negotiations. 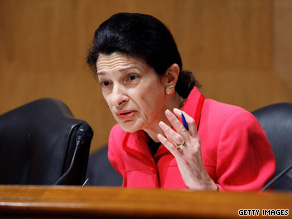 Sen. Olympia Snowe is part of the bipartisan so-called "Gang of Six" negotiating on health care.

The compromise plan would lack a government-run public health insurance option favored by Obama, but would leave the door open to adding that provision down the road under an idea proposed by Snowe, the sources said.

One of the sources said White House officials are "deep in conversations" with Snowe on a much smaller health care bill than Obama originally envisioned.

The modified proposal would include insurance reforms, such as preventing insurance companies from denying coverage to people with pre-existing conditions, according to the source.

Snowe is pivotal to the debate because she may be Obama's last possibility for getting a Republican senator to support his push for a health care overhaul.

She is one of the so-called "Gang of Six" members of the Senate Finance Committee, three Democrats and three Republicans, involved in separate negotiations on the only bipartisan health care proposal in Congress so far.

However, the slow pace of those talks and recent partisan attacks by the other two Republicans in the negotiations have dimmed hopes for a breakthrough, leaving Snowe as the only Republican senator that White House aides believe they can work with on the issue.

Snowe first proposed the so-called "trigger" idea for a public option months ago, and has talked to Obama about it on several occasions, according to a source familiar with the discussions.

The source told CNN that the White House staffers increased their phone calls to Snowe aides and their interest in her trigger idea this week.

Obama and Democratic leaders seek a solution that could win support from a Republican or two, and more importantly, help bridge a divide among Democrats on the public option issue.

Allies of the president hope that if Snowe accepts a health care agreement, she might also bring along her Republican colleague from Maine, moderate Sen. Susan Collins.

Getting some Republicans to sign onto a proposal would improve Obama's chances of gaining the support of key moderate Democratic senators such as Ben Nelson of Nebraska, Mary Landrieu of Louisiana and Blanche Lincoln of Arkansas. All three are skeptical of a government-run public option supported by their more liberal fellow Democrats.

Despite the flurry of direct talks this week between Snowe and White House staff, Snowe aides insist she remains engaged in the "Gang of Six" bipartisan talks that have been going on for months. Those talks have focused on creating nonprofit health insurance cooperatives instead of a public option to force competition and lower medical rates.

The source familiar with Snowe's discussions with the White House said Snowe's trigger idea isn't being considered in the bipartisan negotiations because of early resistance from fellow Republican negotiators, especially Sen. Mike Enzi of Wyoming.

Enzi and the other Republican negotiator, Sen. Charles Grassley of Iowa, insist they are still committed to the bipartisan negotiations. However, their recent sharp criticism of Democratic health care proposals favored by Obama has caused tense relations with the White House.