Sen. Snowe not afraid to buck her party

WASHINGTON (CNN) -- Republican Sen. Olympia Snowe has shown throughout her career that when it comes to voting, it's her principles and constituents that guide her, not her party. 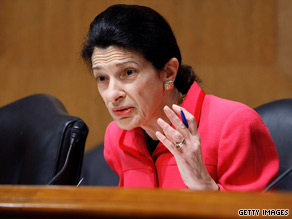 Sen. Olympia Snowe has received overwhelming support from her constituents in past elections.

Those principles, analysts note, are guiding her to find a compromise on health care reform currently stalemated in Congress.

Jennifer Duffy, who follows the Senate for the Cook Political Report, said Snowe's independent streak is "not new behavior for her."

"I think they [Republicans] also realize that the only reason that the state of Maine has two Republican senators at all is the fact that they are very independent-minded and they vote their state," she said, referring to Snowe and Sen. Susan Collins.

In fact, some estimates place Snowe as having voted with her party only 57 percent of the time in the current Congress.

While her moderate views are at odds with GOP opposition to several of President Obama's economic plans this year, the senator's constituents seem to agree with her.

In an interview with National Public Radio in 2006, she said that while her views are moderate, Maine, like other New England states, has been "naturally independent"

"Oftentimes, I tell my leadership, don't blame me, it's just where I grew up," she said at the time.

Snowe, 59, was elected to Congress in 1978 at age 31, and served Maine's 2nd District for 16 years. She ran for Senate in 1994 and won, "becoming the first woman in American history to serve in both houses of the state legislature and both houses of Congress," her Senate Web site notes.

"Because of her centrist views and eagerness to get beyond partisan point scoring, Maine Republican Olympia Snowe is in the center of every policy debate in Washington," the article read. "But while Snowe is a major player on national issues, she is also known as one of the most effective advocates for her constituents."

Duffy said that if Snowe and Collins started voting with the Republican leadership all the time, "They would probably both lose re-election."

Part of the so-called "Gang of Six" on the Senate Finance Committee, which includes three Democrats and three Republicans, she has been actively negotiating with the White House.

The White House said that Sens. Chuck Grassley and Mike Enzi, the other two Republicans in the Gang of Six, have backed away from negotiations, although Enzi released a statement that said he is still willing to talk.

Snowe said it's important to work with the other party despite criticism.

"I think sometimes, yes, I'd find myself in that position, you know, with fewer and fewer ... people who are willing to reach across the political aisle and to create what I ... call the sensible center," she told NPR last week. "I mean, that's where the majority of Americans are. And I try to sort of build those ... bridges."

Part of that bridge building was seen with her votes for the president's $787 billion economic stimulus package in February.

For the past months, Snowe has been pushing the idea of a safety net plan, or "trigger," for a public health care option as part of a key compromise. A source familiar with her negotiations with Obama said that's one of the things they're talking about.

"This option would be available from day one in any state where -- after market and insurance reforms are implemented -- affordable, competitive plans still do not exist," she said in a press release.

Her main concerns so far have been the high cost of health care proposals.

"What we have to do is develop a plan that's going to be available to people on an affordable basis, and, secondly, containing costs both for the American consumer and the American taxpayer," Snowe said in the NPR interview last week.

Cost has been a major part of her bipartisan efforts in the Senate.

"Given the gravity of our economic circumstances, I am pleased that our bipartisan negotiations have yielded a consensus solution that will create jobs, assist the displaced and invest in our economy," she said at the time about the stimulus plan.

She added that it is not a "matter of labeling something as spending or as tax relief; it's finding and including in this package the vital provisions necessary for jump-starting our economy."

All About Olympia Snowe • Republican Party